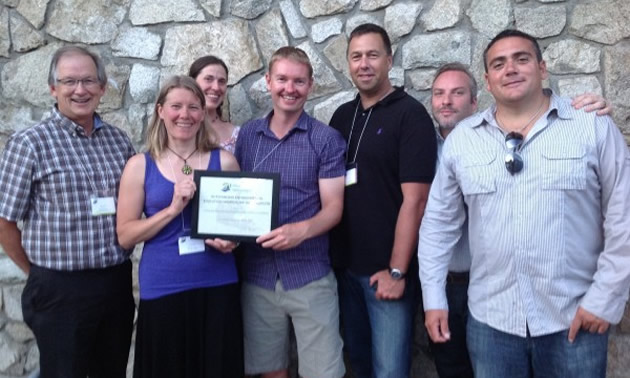 The Columbia Basin Environmental Education Network was awarded the highest prize for an organization of its type. — Photo from CBEEN

CBEEN’s executive director, Duncan Whittick, who received the award on the organization’s behalf, said “I believe this award is a testament to the incredible efforts put forward by countless volunteers, staff, partners, funders and members over the past decade. I also think it is a wonderful launching pad for CBEEN to become an even stronger umbrella network that plays a role in strengthening environmental education for all residents of the Columbia Basin.” -CBEEN

With several projects underway, CBEEN is positioned to continue to grow as a leader for the region in environmental education. Following on the award, the organization will be presenting an Environmental Education Showcase at Radium Resort on September 20, 2013, which the public is welcome to attend.

Incorporated as a non-profit in 2003, CBEEN has since grown from a small group of passionate educators to a vibrant network of more than 400 educators from across the Columbia Basin and beyond.  Currently CBEEN is the only organization acting as an umbrella network for environmental education across the Canadian Columbia Basin; a region internationally recognized for its biodiversity values. -CBEEN

For more information on CBEEN and the award, visit its website.