Here’s a wild idea: Grab your phone and report wildlife

Road Watch BC is running a three-year program to gather wildlife sightings along highways in the Elk Valley region of B.C. 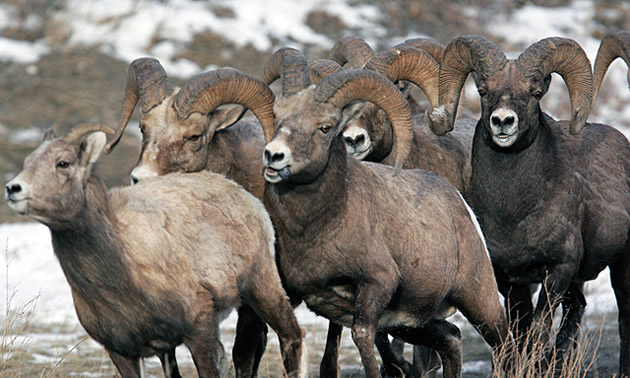 Big-horn sheep are one of the four most common ungulates in the East Kootenay and are a concern for motorists. The other three are white-tailed and mule deer and elk. — Photo courtesy Miistakis Institute

Citizen science has arrived in the Elk Valley and South Country of British Columbia, this time in the service of decreasing the slaughter of large ungulates on our highways.

Grab your phone and download a free new mobile app from Road Watch BC. By reporting wildlife sightings along Highways 3 and 93, you will ultimately help reduce wildlife-vehicle collisions.

“This project is incredibly important for both human safety and for maintaining healthy, viable wildlife populations,” said Beth Millions, the local co-ordinator of Road Watch BC. “We are working towards collecting enough data in three years’ time that we will be able to move forward with mitigation proposals.”

Data from your smartphone—or from an online mapping tool—will be used to map wildlife corridors and given to policy makers to help them implement mitigation strategies, such as wildlife crossing structures.

“These structures have been used globally and have made a heavy impact on the wildlife-vehicle collisions in Banff National Park,” Millions said. “Collisions have been reduced by 80 per cent in the park, and we are hoping to similarly reduce collisions by having such structures implemented on our highways.”

Which species to report

The four most common ungulates in our area—white-tailed and mule deer, elk and big-horn sheep—are the primary focus of the study. However, the public is encouraged to report other species as well, such as grizzly bears.

“Large carnivores, such as grizzly bears, are extremely important to maintaining a healthy ecosystem, and we are very interested in any sightings along highways. That is why there is an ‘other’ option when reporting on wildlife where you can manually enter a species that is not one of the primary animals in the study,” said Millions.

The target area for data collection is on Highway 3 from the Alberta border to just west of Jaffray and on Highway 93 down to the U.S. border. However, the program partners hope to expand the program across B.C.

“For anyone who would currently like to use the app outside of the study area, you are encouraged to do so as this kind of data is still useful and can serve as preliminary data to help the project expand,” said Millions.

The program was officially launched in June of 2016 and is run out of Wildsight’s office in Fernie. Other partners are the Miistakis Institute, the Yellowstone to Yukon Conservation Initiative and the Western Transportation Institute. One of the program’s aims is to connect and protect habitat from Yellowstone to Yukon so people and nature can thrive.

“We intend to work with the government to further develop these wildlife corridors and increase wildlife connectivity and human safety on highways,” said Millions.

Millions is energized by the community response, with over 100 people registered and using the app or online mapping tool to report wildlife sightings.

“The community in the Elk Valley cares a great deal about wildlife,” she said. “It’s really inspiring to see so many people intent to make a difference.”

Register for a route

Road Watch BC would like to see even more citizens involved and to engage current users further.

For example, with using the app there is an option to sign up for a route between two specific points and to report on the wildlife you do or do not see during your travel on this route. This allows Road Watch BC to collect data on the frequency of wildlife along a particular stretch of highway.