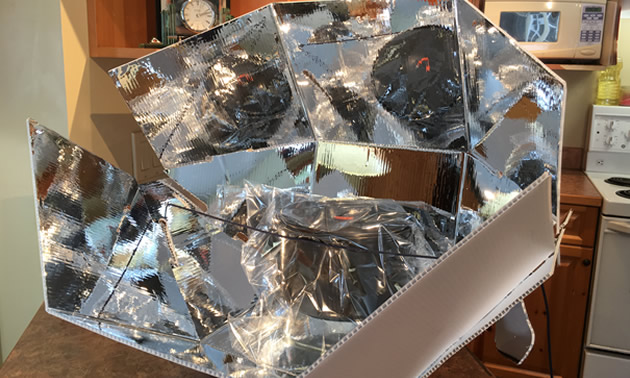 The solar kitchen works by reflecting the sun and capturing the heat inside a plastic bag that contains the cooking pot. — Faisal Jhandir photo

Faisal Jhandir believes humanity can cut its use of cooking fuels by 50 per cent. That’s 7.3 billion people that must burn fuel in order to eat every day. He also believes this change is essential to saving the planet from global climate change.

Now living in Fernie, B.C., Jhandir retired early from his medical career as a professor at the University of Calgary. His new mission in life is saving the planet, and he’s even written and self-published a book aptly named Saving the World Is Not Easy But Someone Has To Do It!

Jhandir calls his solar kitchen an invention to push us into the era of solar cooking. “It is time to liberate ourselves from the slavery of fire,” he said.

The solar kitchen has a clever two-in-one design wherein the shipping box transforms into the solar cooking device. The box, a.k.a., solar collector, is made of coroplast, a corrugated plastic. It is portable, lightweight and weatherproof and is made of 100 per cent recyclable material. The kitchen comes complete with a pot, reusable plastic bags, pegs and cord (but not the kitchen sink).

Jhandir said each solar kitchen could prevent up to one megawatt of heat being released into the atmosphere annually. Furthermore, each unit could prevent 1,000 kilograms of wood from getting cut and burnt for cooking fuel.

The recipe for success with a solar cooker

How does the solar kitchen work? Just put your food into the pot, put the pot into the plastic bag, then put the pot into the stove and point the passive solar panel towards the sun. The panel collects the sun's thermal heat and thus the unit cooks like an oven in one to two hours. Temperatures reach up to 150 C (300 F) and food never burns.

“I wanted something which is portable,” said Jhandir. “So I had an idea to turn a solar stove into a shipping box and my vision was that inside the box would be everything one needs to cook food with—basically a full kitchen in a box.”

A diversity of foods can be cooked in the solar cooker, including barbecued chicken, lentils and rice, and even banana bread or brownies.

The benefits of solar cooking

Jhandir believes there are many environmental and social benefits to solar cooking, not just the obvious one of lessening our carbon footprints. In many countries in the world, people—especially women and children—face a daily struggle to collect fuels for cooking. Consequences of that struggle include children not going to school and widespread deforestation.

Other benefits of solar cooking include:

Jhandir is promoting his solar kitchen to everyone—from boondocking RVers to homeowners in their backyards to people in third-world countries. His vision is for every person on the planet to use solar cooking and thus decrease greenhouse gas emissions, which will in turn decrease global warming.

“Start cooking with sunlight and many of the world’s problems could be solved,” he said.

In the future, this entrepreneur plans to manufacture a long-lasting stainless steel model with a lifetime warranty. Jhandir envisions that these solar cookers could be rented out at campgrounds, parks and beaches. For now, he is in the preliminary stages of production of his coroplast solar kitchen. To pre-order one, visit his website.