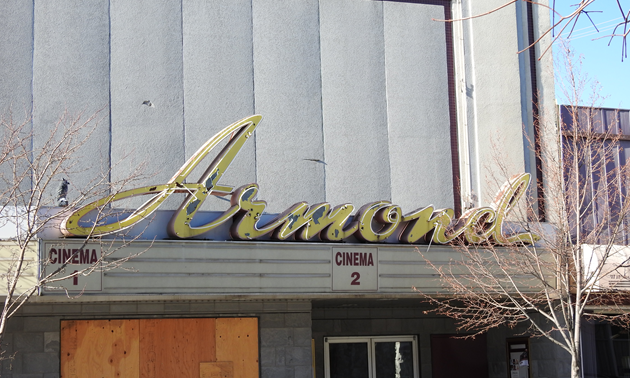 Once a proud theatre in Cranbrook's downtown core, the Armond Theatre is getting another chance at glory. — Julie Matchett photo

Out on a stroll when I first moved to the city of Cranbrook, I remember passing by the sad, derelict Armond Theatre on 10th Avenue and thinking, “What a waste.” I imagine it’s a thought many of us have had as we’ve walked by the old theatre in the city’s downtown core. Old buildings have tales to tell and it’s a sorry sight to see them crumbling—unused and neglected.

Now, a trio of three local area businessmen have come to the rescue of this grand old building and have equally grand plans for the building’s future renovation.

Local carpenter and musician, Ferdy Belland, along with business owners Casey Wright and Spencer Kerr of Casey’s Roofing and Flashing have bought the property from former owner Jean Trimble. They plan to tackle renovations to the building in several phases, with Phase 1—the purchase of the building—completed. Now the real work can begin. All three men have construction and trade backgrounds, so they feel equipped to handle the massive reno work that the old theatre will require, such as structural issues and asbestos removal.

A tentative opening date for the theatre is the summer of 2021, but as Belland remarked to CBC Daybreak South host Chris Walker, “As anybody knows, taking on projects like this, things flex and the schedule goes into flux.”

The ultimate goal is to bring the theatre back to its former glory, complete with Art Deco decor and styling, and use the facility as a multi-purpose venue that will complement the existing entertainment options in Cranbrook.

From glory days to bygone days

March 19, 1952 saw the grand opening of the (then) state-of-the-art Armond Theatre. A capacity crowd of excited theatregoers witnessed the opening ceremonies and watched the premier movie, “An American in Paris” on the big screen. Featuring sumptuous red-upholstered seats, an ultra-modern sound system, air conditioning and a balcony mezzanine, the theatre was the pride of 10th Avenue with its flashy neon ‘Armond’ sign above the facade. Named after managing director Armond Clark Blaine, who passed away before completion of the building, the theatre served the community for 47 years.

Koocanusa Publications’ graphic designer Josh Lorincz remembers going to the Armond as a child. “I saw The Empire Strikes Back there. Crowds used to be lined up all the way down the street to the post office,” he said.

The opening of the Columbia Theatre in Tamarack Mall in the late 1990s spelled the aging theatre’s final demise. A succession of owners has come and gone through the years since.

From restoration into transformation

As outlined in the City of Cranbrook’s Official Community Plan, downtown revitalization is an objective to help encourage new investment, enhance the economy and make the downtown core more appealing to residents and visitors. Along with other recent successful historical renovations in the city, such as the Fire Hall Kitchen and Tap, the Mount Baker Hotel and SoulFood Restaurant, the Armond Theatre restoration promises to help transform the downtown core into an inviting, vibrant and progressive cultural hotspot.