Putting out the welcome mat 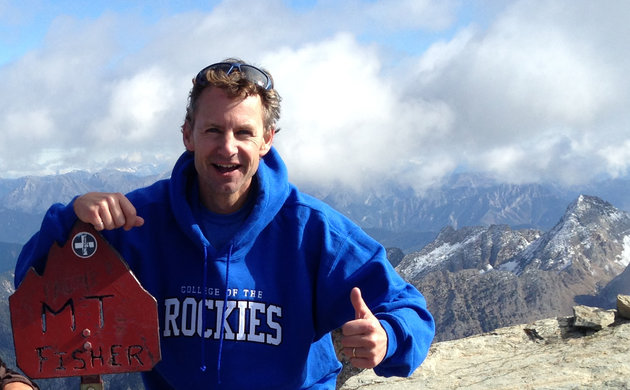 TOP OF THE WORLD, MA: Well, top of Fisher Peak, anyway. Jeff Cooper, manager of International Education at College of the Rockies in Cranbrook, says overseas students are amazed at the vast terrain of the East Kootenay. — Photo courtesy Jeff Cooper

Jeff Cooper's position as manager of International Education at College of the Rockies has resulted in some great experiences—a magical moment sitting alone on the Great Wall of China, for example. But then there are all the hours spent in airports, planes, taxis and hotels, running from one meeting to the next or standing in a booth explaining to prospective students that Cranbrook really isn't a 10-minute drive from Vancouver.

Still, Cooper loves his work as part of a team that oversees all aspects of bringing students from around the world to the East Kootenay—more than 200 of them enrol each year.

Cooper was happy to answer a few questions.

Briefly, what does your position as manager of International Education at COTR entail?

The easiest way to describe my work is that I am part of a team that oversees all aspects of bringing students from around the world to the East Kootenay and College of the Rockies. Our day-to-day work includes recruiting, marketing, admissions, student accommodation including Homestay, student advising, faculty liaising, budgeting and reporting. I’m incredibly fortunate to work with amazing and genuinely caring staff—not  only in our department but in the entire college.

What's the most rewarding part of the job?

This will sound cliché, but it’s absolutely about the individual students. It’s also about the flexibility and individual service we can provide to our students as a smaller post-secondary institution. When students complete their studies and tell you they don’t want to leave, and when departures are with hugs and tears instead of handshakes, you know you’ve made a genuine impact. The college’s vision is to create and deliver the most personal student experience in Canada, and we try to do that for our international students every single day.

What's the most challenging part of the job?

Trying to keep up! I like to joke that I’m having a great day when I’m only two weeks behind. While the busyness of the job is one of the most challenging aspects, it’s also one of the most rewarding. No two days are ever alike, and the amazing staff I mentioned earlier help keep me on track.

How much time do you spend travelling, and do you have any favourite destinations? Where are you off to next?

I don’t travel as much as I used to. I generally have two or three "big" trips overseas each year, and another two or three "smaller" trips within Canada. I will always consider Vietnam as one of my top destinations because it was the first "developing" country I ever visited, and another favourite is Japan because I lived and worked there for two years. Both countries are incredibly diverse with fantastic people, exceptional culinary delights and awe-inspiring places. My last big outing was a multi-city whirlwind of a trip to China in November, and in April a colleague and I are off to "incredible India."

Where do international students at COTR come from mainly?

Through a combination of luck and hard work, we have a diverse group of more than 200 students who come from about 40 different countries each year. Right now we have the largest number of students coming from China (representing about 20 per cent of our total international students), and we also have quite a few from Japan and India.

To maintain our diversity, we are involved with a few specialty programs that allow us to bring in more students from countries from which we otherwise would have few or no students, including Science Without Borders (Brazil government scholarship program) and Emerging Leaders of the Americas Program (ELAP—a Canadian government scholarship program that supports students from Latin America to study in Canada for one semester). We are always looking for new partners and opportunities to further expand the diversity of our international student body.

How does the college "sell" itself, and the Kootenays, to potential students from overseas?

The reality is almost no one abroad has heard of the Kootenays or College of the Rockies, but many do know Canada and British Columbia as a destination. Sometimes I get questions like, “If I study in your college and I want to live in Vancouver, how far is it to drive to your college?” We know for a fact that many students end up coming to COTR because of our strong, personal student service and our prompt response time.

Cheryl Webber has worked in our International Education department for over 20 years and she oversees all international student applications and queries. She is exceptional at her job, and we have heard many students tell us, “I came to College of the Rockies because Cheryl answered all my questions very quickly.”

In addition, in the largest worldwide survey of  international students we ranked No. 1 in the world for overall average satisfaction two years in a row. The survey asks students questions about their experiences related to learning, living, arrival and support—so the ranking reflects positively on our entire community, not only the college. This kind of acknowledgment helps both our recruitment and also our student retention efforts.

Do you have any anecdotes describing what kind of "culture shock" students coming to the Kootenays might experience?

Definitely the vastness of our region and our small population are a shock to many new students. Beyond that initial impression, it’s often a series of small events rather than one large event that leads to what could be considered "culture shock." One former student said she experienced culture shock when she was ill and her host family offered her ginger ale to drink. For most Canadians having ginger ale as a home remedy is fairly common, but for her being offered a sugary soft drink when she was sick was a completely bizarre and foreign concept!

Sometimes we also hear from our Homestay families about cultural differences leading to interesting situations. One hosted a student who came from a country where the entire bathroom is commonly used as a bath/shower room with a drain in the middle of the floor. The first time the student had a shower (he or she) did not use the shower curtain and the whole bathroom was soaking wet.

(In rare events when culture shock is more serious and can lead to depression, the college has a full-time counsellor on staff, as well as a 24/7 telephone and chat support service offered in over 200 languages.)

Do you have a favourite travel anecdote that arose out of your job?

The unglamorous reality of travelling for work is that most days, including many nights and most weekends, are spent in airports, planes, taxis, hotels and running from one meeting to the next or standing at a booth talking to students and parents about what programs, services and opportunities the college has to offer. But in a two-week trip abroad I always try to take at least a half a day or one full day off to be a tourist and see the sights.

On my first trip to China nine or 10 years ago, I was able to visit and walk around parts of Beijing including The Forbidden City, Tiananmen Square and nearby to a section of the Great Wall. At one point, I was able to walk far enough along a renovated portion of the Wall to escape the hordes of other tourists until I came to a crumbling and rickety portion of what I assume was the original Great Wall. Sitting on the Great Wall of China completely alone, away from the craziness and smog of Beijing, surrounded by only nature and the rolling mountains was a magical moment. Contemplating the historical significance of the Wall and its 2,200-year storied past was humbling. It’s a moment I will never forget. (Oh, and later that day eating a scorpion. That was different.)

For more reading about travel adventures, musings and anecdotes, there are a number of interesting blog posts from College of the Rockies' staff and students here.