Being open to serendipity 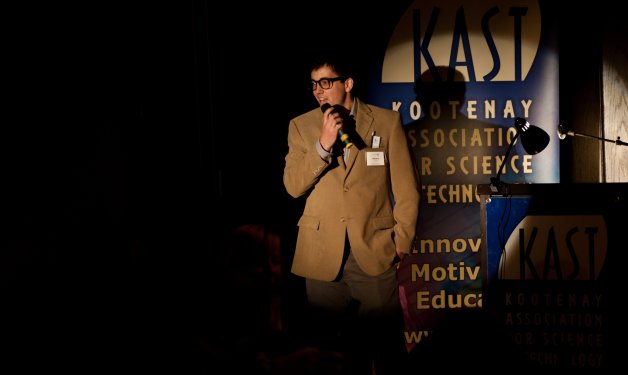 Andrew Zwicker, the creative force behind the Rossland-based business AZcreative and host of the You Can Do That Here! podcast series, might best be described as an entrepreneur's entrepreneur.

Originally from Dartmouth, Nova Scotia, and a Rossland transplant for the past 10 years, Zwicker is an entrepreneur himself, and he has great admiration for the many folks in the Kootenays who share that spirit.

Zwicker produces the podcast series that profiles and promotes those fellow innovators he so admires for the Kootenay Association for Science and Technology (KAST), a company that employed Zwicker for about six years and is now one of AZcreative's clients.

Zwicker describes the You Can Do That Here! podcasts as "a weekly series of 30-minute conversations with some of the most innovative and successful entrepreneurs in the Kootenays. They say the best way to succeed in business is by talking to the best. We've saved you the legwork, so you get to just listen, learn and enjoy."

Think of them as TED Talks, Kootenay-style.

He suggests downloading the podcasts onto your phone, then listening to them while you're driving, or working out, or walking the dog—anytime you want to enhance your downtime with some fascinating insights into the mind of the Kootenay entrepreneur.

Zwicker, who is also a Rossland city councillor, talked to Kootenay Business about his venture into podcasting with a truly infectious enthusiasm.

What gave you the idea to produce these podcasts?

The podcasts launched last August, but I've been an entrepreneur for a long time and my wife was a radio personality . . . I was just getting into listening to podcasts myself, even though they've been around for about 10 years.

They're fantastic—there are so many good shows out there. And I started thinking about what was missing in the Kootenays—what's that niche that's not being filled here. I also did a business retention and expansion survey for KAST and the No. 1 thing that they all said they wanted was regional promotion, (both with) the outside world and also within the region. Podcasts are relatively inexpensive to produce but they have a broad reach to help achieve those goals.

What is it about entrepreneurship that appeals to you?

Ever since I was a kid, I've loved making stuff. When I was a teenager, I wanted to try doing stuff that made money! I would say that I am not a great employee, but I am a great business owner and an excellent entrepreneur. It's a way to channel my creativity into something that's productive and will help people.

What do you love about other entrepreneurs?

They're people that make things possible. I love hanging out with optimistic people, people that say you can do that here—hey, there's the name of the show! (laughs)

What are the characteristics of a successful entrepreneur?

The ability to know where you are, to know the people and community around you, and to know yourself. The biggest one of all is being open to serendipity! It's amazing how many times opportunities will pass you right by. It's about being open to the chance encounter.

Who were your own inspirations?

My dad. When I was 10 or 11 or 12, that age when you're starting to become who you're going to be, my dad made the jump into his own business. That's been really inspiring.

What kind of response to the podcasts have you had?

Way better than I expected! I initially hoped for about 500 to 750 downloads a month. We achieved that goal in three months, then last Christmas we cracked 800. Now we're up to about 1,000 a month. One of the things that really drives it is social media connectivity.

Are there any especially unusual entrepreneurs in the podcast series that you can mention?

The diversity is really spectacular, from a guy who designs and builds particle accelerators above the Home Hardware on Baker Street in Nelson, to our most popular podcast, the Rossland Beer Company—a couple of guys who had a passion for beer and they gave up their jobs and went all in and are now having tremendous success. In second place is Kootenay Country Craft Distillery—maybe I'm seeing a bit of a theme here!

Tell us a bit about other AZcreative projects.

I call it youngest-child syndrome. As the youngest brother of three, I'm a bit of an attention seeker. So I love to do public speaking. I'm starting to do more and more of it—motivational speaking, facilitating meetings and so on.  I do about one magazine article or newspaper article or copywriting project a month, and I do a lot of logo and branding work. When I think about it, what's the common link? It's storytelling. That's what AZcreative is all about, telling people's stories in exciting and engaging ways.

What do you love most about living and working in Rossland?

Even though it's a small town, I have more interactions on any given day than I would have in a big city. The common bond in the Kootenays seems to be that everyone is very passionate about something. They're excited about life and that's really inspiring to be around.

What book is on your nightstand now?

Right this moment, I'm re-reading The Motorcycle Diaries (an account of the travels in South America of Ernesto "Che" Guevara, the author-physician who was a major figure in the 1950s Cuban revolution). My famly did a really awesome backpacking trip last year in Cuba, following the path of the revolutionaries. That trip was life-changing. It made me think: "What if you did everything you could? What if you just went out there and were awesome and weren't afraid?"

How can people find the You Can Do That Here! podcasts?

Here are the ways people can find the show: