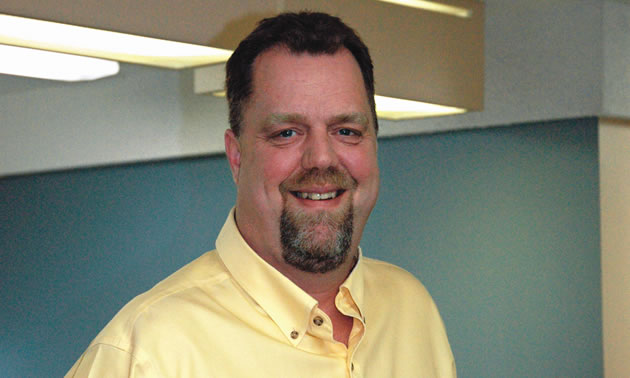 Cranbrook Realtor Jason Wheeldon has a list of achievements to his name. — Glynis Fediuk photo

How many people can say they’ve won a lifetime award of excellence by the age of 42?

Jason Wheeldon can—along with numerous other age-defying achievements. At the age of 23 he was one of the youngest Realtors in Canada, and in 2000, he had the distinction of being the youngest Cranbrook Chamber of Commerce president in the chamber’s history. In 2011, Wheeldon was recognized as Business Person of the Year by the Cranbrook chamber.

When Wheeldon first entered the real estate market in the mid-’90s, he grew a beard to look older and subsisted on boxed noodles. Times have changed—Wheeldon is now a successful real estate agent who loves getting the results desired by his clients.

“By about 1998 I realized that I had a steady practice and a career,” said Wheeldon. “1994 was the last downturn in the real estate market. The best training ground for a real estate agent is coming into a tough market. You learn how to dig, how to provide the service and how to navigate through the economic turmoil. When the market started getting better in the 2000s, we were fully prepared for it. Now, we're in the exact reverse: we're back in tougher markets, but we still have a healthy practice.”

Wheeldon is looking forward to an improving real estate market in the upcoming year, but for this family-minded man, spending time with his wife and children is paramount. It is the friendliness of Cranbrook that has kept him in the East Kootenay, rather than trying for success in larger markets; originally from Fernie, Wheeldon wanted to raise his kids in a place with a friendly feel. And, fittingly, it is his family that he ranks as his greatest achievement, above any awards hanging on his office wall.

That said, Wheeldon also recognizes that real estate is not a 9-to-5 job. He is in the office at the crack of dawn every morning and has to work on call—but the resulting assiduity is a sign of prosperity.

“The biggest advice—and I do a lot of mentoring for the younger colleagues—is to work hard, know your products and know your clients’ expectations,” said Wheeldon. “It's important to set out realistic expectations, regardless of the market you're in. That will never change.”

Years in business
18 in 2012
Grew up in
Fernie
Family
Married, with two children (ages 6 and 9)
Downtime activities
Spending time with his family
Community involvement
Sitting on the board for the Cranbrook Soccer Association
Must-reads
Think and Grow Rich, by Napoleon Hill
The year ahead
Anticipating an improving real estate market and debuting new marketing practices