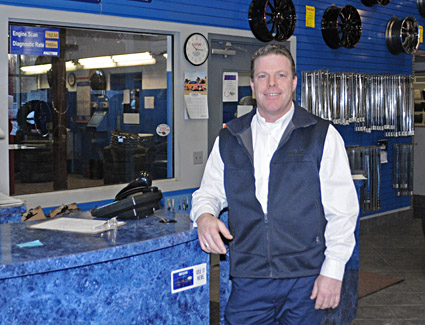 “Busy is relative, but we’re a diverse shop,” said Bruce Robertson. “We deal with the passenger and retail end, the commercial end and the mining end, so we deal with a little more than most locations.”

That said, customers come from the nearby communities of Fernie and Elkford as well as from the Crowsnest Pass in Alberta, so Robertson must be doing something right. He said the goal in the shop is to always exceed customers’ expectations.

“Everybody in the store knows that the customer going away happy and getting the best value for what they’ve purchased is the most important thing,” said Robertson. “And we do that consistently.”

Robertson started with Kal Tire 23 years ago in Merritt, British Columbia. His first position was as a part-time shop attendant. He worked his way up the ladder to assistant manager of a branch in Hinton, Alberta, before taking on the role of manager in Sparwood almost 11 years ago.

Robertson said he takes pride in being able to encourage his staff of 13—which includes his son, Cory—to excel at customer service. Mentoring his younger employees and helping them to reach their own goals is greatly rewarding to him and he relishes his role as teacher.

“The (Manager of the Year) award that I got from the chamber is a reflection of the team that I’ve got here,” he said. “And it’s something I’ve always enjoyed watching—people grow and develop through their careers.”

Years in business
23
Grew up in
Merritt, B.C.
Downtime activities
Family, camping
Community involvement
Past president of the chamber of commerce