Aaron Seminoff is happy that his business helps provide so much enjoyment to so many people. 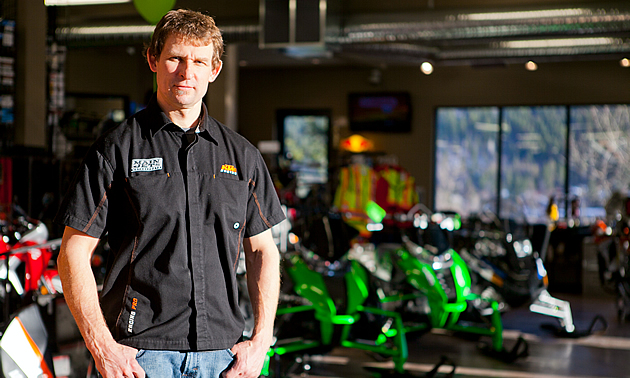 Aaron Seminoff is happy that his business helps provide so much enjoyment to so many people.

Aaron Seminoff’s passion for all things motor-powered emerged before he was 10 years old. He followed his parents around British Columbia on the snowmobile racing circuit and learned to ride a sled at the age of five. His passion for motorcycles was triggered when his father took him to see the motorcycle documentary On Any Sunday when he was about eight.

“I started working part time for my dad at his motorcycle dealership in 1979 and it eventually turned into a full-time gig,” said Seminoff, a 47-year-old native of Nelson. “I love the enthusiasm, the fun and the camaraderie. I enjoy being in the mountains and the outdoors. Power sports make the outdoors accessible for all types of people.”

“We outgrew our space,” said Seminoff about Main Jet’s former location on Lakeside Drive. “The technology of the new building is state-of-the-art.”

From the new mechanic's bay to the big-city design of the building and the community craftsmanship in the construction, the new space is something that Seminoff is quite proud of.

He’s also happy to have a business that helps provide so much enjoyment to so many people, and he loves heading out for a ride on his dirt bike and seeing someone having fun on a bike they bought from his store.

Years in business
28 years in the industry, six years as Main Jet
Grew up in
Nelson
Family
Partner, Jen, and daughter Haley; three other grown kids: Lauren, Chelsea and Ryan
Downtime activities
Dirt biking, reading Racer X magazine
Community involvement
Motocross club, snowmobile clubs, Summer Solstice Ride
Must-reads
I just read A Boyhood in Nelson: Growing up During the Depression, by Kenneth Morrow.
The year ahead
I’m taking a motocross trip to California in January for the first round of the AMA Supercross in Anaheim and then hitting various tracks on my CRF450. Other than that, I’m hoping to see all my regular customers along with some new ones.