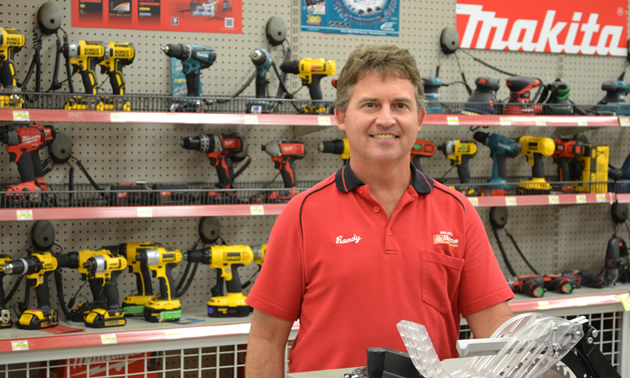 There are two Home Hardware stores in Nelson, B.C. One, Hipperson Hardware on Baker Street, has been owned by the Horswill family for 91 years. The other store, Nelson Home Hardware Building Centre, located at 101 McDonald Drive, is just 10 years old. Randy Horswill is the fourth-generation owner of Hipperson and he owns the McDonald Drive store as well.

Kootenay Business is including Horswill on its list of Top 10 Kootenay business people for 2014, and we asked him about some of the components of his business success.

Can you tell us about a particular challenge that you’ve had in business?

Right at the time that I bought the new store, the economy cranked up and we had a tremendous amount of growth.  It was challenging to manage the finances in a way that allowed us to grow but didn’t swamp us with debt. We started with eight people and now we’re at about 45. It hasn’t changed much in the last four years, but at first we were hiring people like crazy. That kind of growth has its stresses, but it’s a nice problem to have.

What is it that drives and inspires you?

It’s meant a lot to me to get a couple of excellence awards from the chamber of commerce, because it’s a reflection of how we’re perceived in the community. I’m not a hard driver. I just want to have a good day and for our staff to be happy—that makes happy customers and that is reflected in the registers. It’s not a complicated way of going about things. The bottom line looks after itself if you look after what goes on in the store.

We won the Best Large Retailer Award from the chamber of commerce earlier this year, and I’m sure it’s because we have an unbelievable staff. You just have to walk into the store to know that there’s a pretty special atmosphere here. People like coming in here, and it goes beyond customer service. Our staff have a way of making people feel welcome. I’ve been fortunate enough to be able to pick really good people to surround myself with. When we hire people we look for skills, of course, but we hire based on personality and character.

What advice would you give to someone who is going into a retail business?

It’s all about the people. You’ve got to employ the right people in order to create the right relationships with the customers. We have a lot of competition—bigger centres in Canada, the cross-border shopping, the Internet. The only thing that really differentiates us is our people.