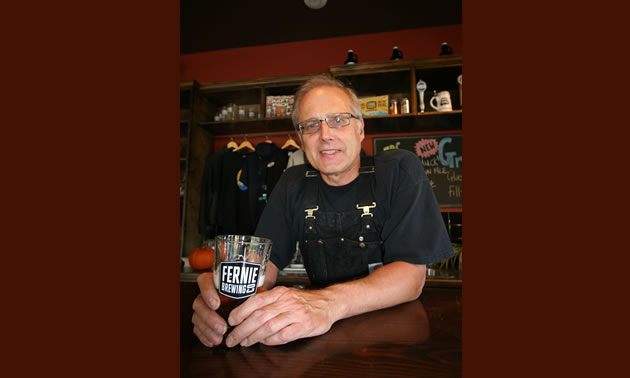 January 2013 officially marks 10 years since the first beer went out the door at Fernie Brewing Company (FBC), and this year is set to be another strong year for FBC, with a recent extension to the existing brewery, new tanks and seasonal brews in the works.

Gord Demaniuk is the head brewmaster at FBC. Demaniuk said brewing is his passion and he's been directly involved in the industry for over 35 years.

"There are really several aspects of the job I enjoy," said Demaniuk. "I have to say developing a new brew style really gets my creative juices flowing. I also really enjoy working with our staff and my role in mentoring them in their professional development. Implementing expansion plans and other improvements are also very satisfying, but finally seeing people enjoy our labours is also up there."

When we caught up with Demaniuk in mid-December, he was excited to tell us about one of his latest brews—the limited-release Black Mammoth Winter Ale.

FBC also saw huge success in 2012 with winning the Fernie Business of the Year Award on October 25, 2012, at the Fernie Chamber of Commerce Community and Business Excellence Awards ceremony.

“We certainly couldn’t do it without the ongoing support of local businesses and individuals," said Abi Moore, FBC's marketing guru.

As for Demaniuk, he's excited to keep on making the best beer he can in a community that he absolutely loves.

"I moved to Fernie because I really wanted to get involved with a first-class, growing craft brewing operation and contribute to its success," he said. "Fernie, and the Kootenays in general, is a great place to live."

Where did you grow up?

I grew up in Saskatoon and worked in major and craft breweries in Saskatchewan and Alberta (before) moving to Fernie.

When you were a child, what did you want to be when you grew up?

I was very interested in biology, including ecology. I remember I wrote a paper in the '70s on global warming. I have an artistic side, so industrial design and engineering was also an interest.

Are you a competitive person?

I prefer to think of myself as a person who always strives to be the best that you can be in achieving any endeavour. I suppose that could be competitive, but I am not compulsively competitive.

Would you describe yourself as an introvert or an extrovert?

I am a very reflective, soft-spoken, scientist type and therefore have introvert tendencies, but when it involves my passions, I can be an extrovert. What can I say, I 'm a Gemini.

Who is your corporate hero?

Gosh, that's a hard one—so many people. I suppose I admire Steve Jobs for what he created and his vision. Another person I find inspiration from is Napoleon Hill. I'm also impressed with another CEO—his name is Sergio Marchionne. He is the Italian-born, Canadian-raised and -educated head of the Fiat and Chrysler auto group. He has been largely credited for the turnaround at Chrysler.

What do you personally find to be the juiciest aspect of your business?

I think it is the way the brewing industry is evolving. While there will be a place for mass-produced, marketed global brewing companies, it is so exciting to see the growth in locally handcrafted breweries. I always seek out local products when travelling. I am especially proud that I have two sons who are also in the brewing industry.

I have participated in the Fernie Artist Guild; I do landscapes mainly—that artistic side. Also, I have an older Italian sports car (Alfa Romeo) and was involved with the Fernie Show and Shine this year. I hope to be involved in more community events in the future.