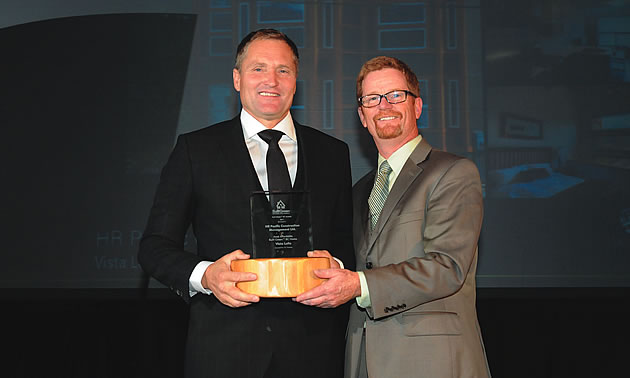 “I have always enjoyed building fine homes, and to build resort homes in this environment is a dream come true,” said David Ratzlaff, principal of HR Pacific Construction Management in Golden. “For a builder, there is no better work than to build architecturally designed homes on a ski hill, and when I was a teenager I saw how Whistler took off and always wanted to be part of a new resort community.”

Ratzlaff is speaking about his company's achievements in Golden and at Kicking Horse Mountain Resort (KHMR). He is excited about the year ahead, especially if it is anything like last year. He said HR Pacific had a very productive year in 2011.

“We have expanded into the Calgary market and have two architecturally designed projects under construction in Calgary, as well as three resort homes in Kicking Horse Mountain Resort,” said Ratzlaff.

When asked about his company's community involvement, Ratzlaff said that it supports the Kicking Horse Culture Association and hosts a contractor's golf tournament every year, with proceeds going to a local trade scholarship. As well, one of the company's policies is to build a home in Nicaragua for every home built here. Two employees will be there in January to work on the projects; this is through Bridges to Communities.

Years in business
Ratzlaff has over 25 years' experience in building custom homes.
Grew up in
Vancouver
Family
Wife, Ruth, and four sons. Three of the sons have always worked in the company. The fourth son works for an architectural company in Vancouver and is a great resource for the company.
Downtime activities
Skiing as a family and outdoor activities around Golden.
Community involvement
Ruth is very involved in the community in music. The company supports the Kicking Horse Culture Association, sponsors a local trade scholarship through a golf tournament, and participates in Bridges to Communities.
Must-reads
Ratzlaff said any book that has anything to do with British Columbian or Canadian history is a must-read (Ratzlaff's father was a history teacher). He added that Walter Isaacson's book on Steve Jobs is a great read for anybody in who likes technology.
The year ahead
The company has made some great contacts with some well-known architects and is presently looking at a number of unique projects. HR Pacific is hoping for great things in 2012.