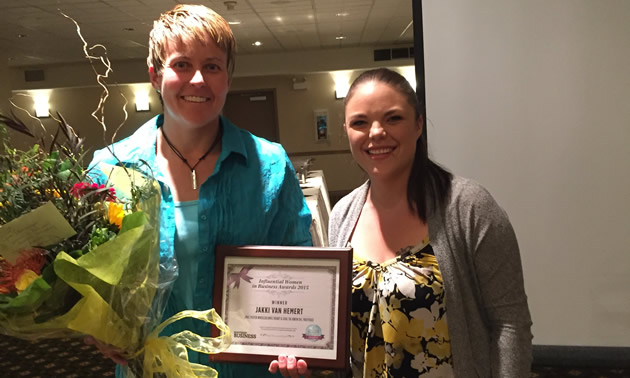 Eighty-one people attended the fourth annual Influential Women in Business (West Kootenay) Awards luncheon at the Best Western Hotel in Nelson, B.C., on June 5. The awards are an initiative of Kootenay Business magazine, whose publisher, Keith Powell, hosted the event.

Sue Dyer, vice-president of operations for Columbia Power Corporation, and Danielle Cardozo, Cranbrook city councillor, were guest speakers at the luncheon. Dyer talked about the importance of following an action plan in business and in life, and Cardozo spoke movingly about being a competitor on the first season of MasterChef Canada and what she learned from that experience.

A three-person panel answered questions posed by Powell, sharing insights into their business success. Judy Banfield of Mountain Baby in Nelson offered a do-and-don’t list for retail business. Penny Axenroth of Pennywise Ads in Kaslo said that it’s important to hire good people and then stay out of their way while they do their work. Rebecca Vassilakakis of Krueckl Financial Services in Castlegar spoke about the value of her involvement with the West Kootenay Women in Business group and about her work as a financial planner.

Selected to receive the 2015 Influential Women in Business awards—and acknowledged with warm applause and congratulations—were Leah Scherk of ThoughtExchange in Rossland, Rachel Ross of Mandala Homes in Nelson, Jakki Van Hemert of AMEC Foster Wheeler in Trail and Judy Goodman of the Revelstoke Chamber of Commerce.

“This event has caught the imagination and the hearts of businesswomen in the Kootenay Region,” said Powell.