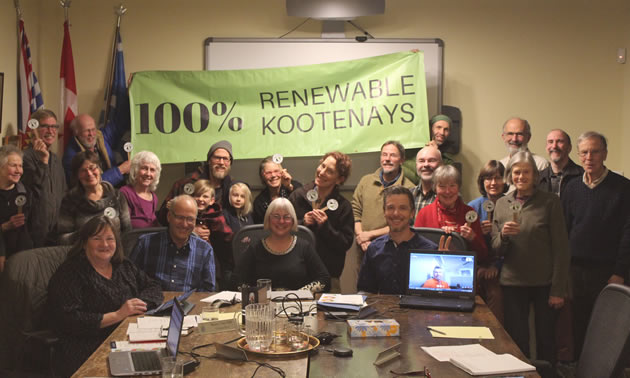 Kaslo is the latest West Kootenay community to sign on to 100% Renewable Kootenays, which took place on December 10. — Photo courtesy West Kootenay EcoSociety

Local communities in the West Kootenay are stepping up to fight climate change and create a greener future.

On November 18, the Castlegar City Council voted to join the growing number of cities who are committed to transitioning to 100 per cent renewable energy no later than 2050.

It’s called 100% Renewable Kootenays, and it’s a campaign of the West Kootenay EcoSociety. The goal is for the Kootenays to phase out fossil fuels and be on 100 per cent renewable energy in all sectors no later than 2050.

In Castlegar, 50 people came out to Castlegar council chambers to represent the over 1,100 residents and 18 businesses that signed the petition for the 100 per cent renewable energy transition.

This was the second time the transition to 100 per cent renewable energy was on council’s voting agenda and this time it was successful.

The motion was not passed unanimously, but that’s a good thing. Councillor Sue Heaton-Sherstobitoff said, “I voted against the motion because I wanted an even more ambitious commitment from the City to the renewable energy transition, but I’m glad we’ve passed a resolution so we can get to work with other like-minded cities to figure out the path forward.”

The Village of Warfield wants to make a difference

On December 4, the Village of Warfield passed the resolution for 100% Renewable Kootenays.

“On behalf of the Village of Warfield Council, we are so excited and proud to join the 100% Renewable Kootenays initiative,” said Mayor Diane Langman. “Our Council has been looking at how to work towards initiatives such as this, however, it was overwhelming. Where do we start?

Up in the Village of Kaslo

On December 10, 30 people came out to Kaslo council chambers to show support for the 100 per cent renewable energy transition.

“I am proud to be a part of Kaslo's Climate Action Team (K.C.A.T.), a group of determined local citizens who are helping to increase awareness about climate change and the need to shift towards 100 per cent renewable energy in our own backyards. It takes a village!” said Kaslo resident and volunteer Lynn van Deursen, who helped lead the effort in Kalso and will be working to achieve this vision with the Village council, K.C.A.T and Kaslo residents.

The progression of the campaign

Between 2017 and early 2019, five West Kootenay communities signed on to the 100% Renewable Kootenays campaign: the Village of Slocan, Nelson, Rossland, New Denver and Silverton. The Regional District of Central Kootenay (RDCK) also signed up.

“The level of leadership that is coming out of local governments in the West Kootenays is impressive and gives me hope,” said Montana Burgess, executive director of the West Kootenay EcoSociety. “Paired with community and business support, we can surely transition to clean energy and build health communities with strong careers for our families.”

Currently in Canada, 17 local governments in B.C. (including the nine here in the West Kootenay), Saskatchewan, Ontario and PEI have committed to 100 per cent renewable energy, along with over 100 in the U.S. and over 150 others around the world. This movement is growing.

According to Burgess, support is now building in Creston, Salmo and Trail.