Targeted grazing is a “new ancient technology,” according to Cailey Chase 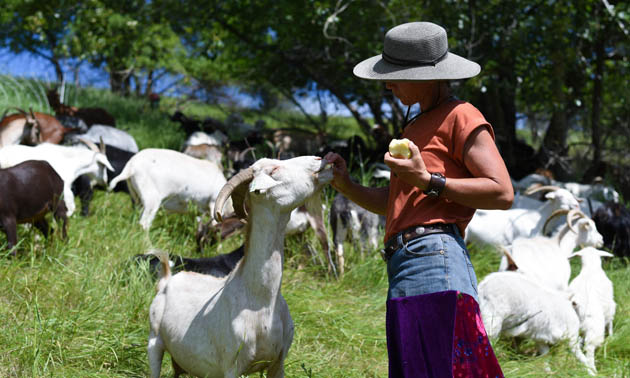 Cailey Chase is a shepherd who fosters the partnership between goats, people and plants. — Janel Nail photo

Weeds got your goat? Have goats get your weeds!

A bunch of goats—called a trip—are for hire through Vahana Nature Rehabilitation. Owned by Cailey Chase in Ta Ta Creek, the 230 goats are the key players in a business venture started in 2016.

Goats are grazers, so Chase uses the goats for targeted grazing to control invasive plants in the Kootenays. Chase and her goats ideally stay three or four weeks on a big project.

“I call it a new ancient technology,” said Chase, as goats, plants and humans have been working together for thousands of years.

The goats are trained to eat some plants and not others; hence, it’s targeted grazing. For example, grazers have been used in forestry cutblocks to eat the vegetation around newly planted tree seedlings.

In her projects, Chase said, “We [typically] get the goats off cottonwood trees but not the Manitoba maples.”

Invasive species can create monocultures by outcompeting native plants. And some of the invasives are prickly and uncomfortable to be around. Chase said the top four target species for her goats are:

Often, invasive weeds are controlled by pulling them by hand and bagging them, which is very labour intensive. This method also removes valuable soil and beneficial insects like pollinators, all of which go into landfills.

Chemical herbicides are also used in invasive weed control but some folks want to avoid using toxic chemicals on their properties.

On the other, er—hoof, goats graze across the land, leaving their droppings that recycle nutrients back into the soil. The goats leave the insects alone. And they stomp the vegetation down, thus increasing the organic matter in the soil, which retains more water and helps microorganisms.

Chase explained that many of her projects use integrated pest management, meaning that the goat grazing may be followed by deadheading the plants or chemical control.

Diverse clients for the goats

Vahana Nature Rehabilitation’s first client was the Ktunaxa Nation. Other clients have been the cities of Kimberley and Fernie, where goats have grazed a hiking area and a dog park, respectively. Resorts and ranches have also hired a trip of goats for weed control, and homeowners are potential clients too.

Chase has even trailered her goats to a job in Calgary.

The goats are repeat performers because weed seeds stay in the soil, creating seed banks that can last 10 years or more.

“You have to go back to the sites every year for some projects,” said Chase.

Chase is looking for more work, and she thinks some homeowners would benefit from her goats. For example, goats can create firebreaks by grazing grass down to decrease fire risk. They can also be used for the general clearing of land.

“I’d like to extend my grazing season into the spring and the fall,” she said.

The Zen of goats

Wherever the trip of goats goes, a herd of people appear.

“People love the goats,” said Chase. “There’s always a crowd around the goats.”

“I love the way it creates beauty … all those beautiful animals working across the fields,” she said. “I’m enveloped by nature all day long.”

If Cailey Chase looks familiar to you, she has been seen selling bread at the Kimberley Farmers’ Market for the IshtaDev Niwas Ashram and Farm in Ta Ta Creek, where she is an integral part of the farm.

Chase can be reached via email: [email protected]