Castlegar is committed to energy conservation 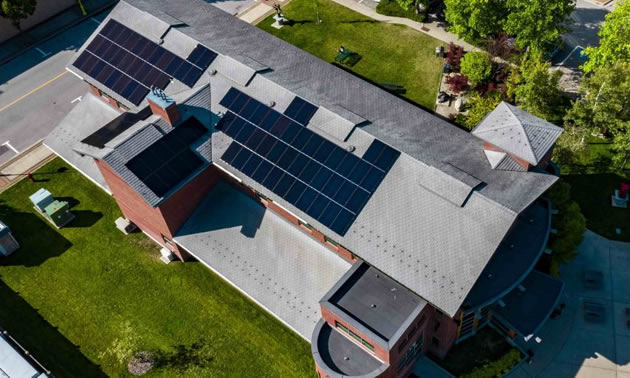 A solar array installed on Castlegar's City Hall, a project which will reduce emissions and generate 28kW of electricity. — Photo courtesy City of Castlegar

A strong commitment to embracing renewable energy is clear in the City of Castlegar. New solar panels have been installed on the rooftop of City Hall, which are visible when travelling in the community along Columbia Avenue.

The solar array will save the city an estimated $2,600 per year, generate 28 kW of electricity and reduce emissions. The $100,000 project was made possible through the Columbia Basin Trust’s Energy Sustainability Grants and BC Solar Now’s contribution and mandate to engage British Columbians in a global shift to renewable energy by allowing people to experience solar power first hand.

“Our Council is so happy these panels are installed and operational,” said Mayor Bruno Tassone. “We are excited to be demonstrating innovation and sustainable solutions that reduce our carbon footprint and save money.”

Castlegar City Council also recently voted to be part of the West Kootenay EcoSociety’s 100% Renewable Kootenays challenge, becoming the seventh local government in the region and the 15th in Canada to pass such a council resolution. With support from over 1,100 Castlegar residents and 18 businesses, the city will transition to 100 per cent renewable energy in all energy use sectors in the community including heating and cooling, transportation, electricity and waste management by 2050. Joining the Village of Silverton, the Village of New Denver, the City of Rossland, the Village of Slocan, the City of Nelson and the Regional District of Central Kootenay, Castlegar is committed to a cleaner, healthier and safer community.