Locals and visitors have been flocking to the Bay Avenue location to get a taste of Trail Ale, Silver City Lager and other brews 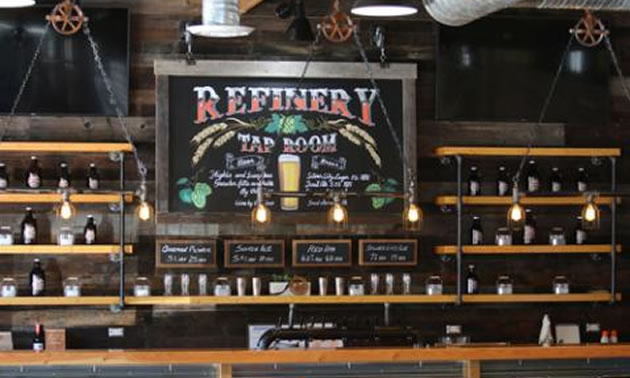 The taphouse in downtown Trail has become a bustling gathering place that has brought a new life to the core of the community. — Photo courtesy Selkirk College

In a town built on blue collar values and community pride, Selkirk College Instructor Mike Konkin has tapped into the perfect business model in downtown Trail. Take the beverage of choice, throw in a cheerful gathering place, mix in some great food, add a touch of what makes home special, and you have the Trail Beer Refinery.

With a group of 13 passionate partners, the veteran Business Administration Program instructor opened the brewery and taproom at the end of March to rave reviews. If the weekend line-ups are any indication, the thirst for fresh locally brewed quality beer was long overdue.

“In our first meetings when we were talking about vision statement and values, it was simple… we wanted to build brewery that would make Trail proud,” says Konkin, the CEO and major shareholder of Trail Beer Refinery. “Everything that we do is trying to make Trail proud of us because we are doing it for the community.”

Locals and visitors have been flocking to the 1299 Bay Avenue location to get a taste of Trail Ale, Silver City Lager and an assortment of special brews that are available when the batch is ready. In beautifully designed surroundings described as “blue collar classy” and colours that pay tribute to Trail’s rich sports history, the excellent food and quenching liquids that flow out of the taps have combined for a winning combination.

“We’re not trying to be anything we’re not… it’s authentic,” says Konkin. “When you want support, there is nothing like Trail. But you have to deliver a quality product and be true to it, then people will get on board.”

Pride of Place an Important Theme

The pride and excitement that oozes from Konkin over his new homegrown endeavor comes naturally. Born-and-raised in Trail, Konkin’s dad operated the family hardware store before getting into financial planning and his mother worked as an OR nurse in the Trail Regional Hospital for an incredible 35 years.

After graduating from JL Crowe Secondary, Konkin didn’t need to search far for the right post-secondary start and jumped right into the Business Administration Program at Selkirk College. After completing the two-year diploma program, he transferred to the University of Victoria and then Thompson Rivers University where he completed his degree.

“I always wanted to get into teaching, but I knew that I needed to spend some years in the field so that I knew the practical side,” Konkin says of his career strategy.

Instead of returning to the West Kootenay right away, Konkin lived the life of a young accountant in Vancouver starting in the mid-1990s earning his CGA and working in the high-rise buildings in the downtown for companies like McDonald’s Corporation, Fletcher Challenge and Rocky Mountain Chocolate Factory. When it came time to raise a family, in 2000 Konkin and his wife decided that the best place to grow up was back in Trail.

Though he was finding success at his busy accounting practice and involvement in a tech start-up, when the chance to teach a course in auditing at Selkirk College came up in 2007, Konkin was fresh off completing his Master’s of Business Administration for Laurentian University and didn’t hesitate. One class and one semester turned into more classes and more semesters. Today, Konkin is the senior instructor in the Business Administration Program with a focus on tax, finance and accounting.

No Beer Snobs at The Refinery

Konkin first entertained the idea of opening a brewery in his hometown 15 years ago, long before the craft beer craze had taken hold. He put together a business plan, but at the time it seemed a little ambitious and it was shelved.

That all changed in February, 2016 when Konkin accompanied a group of Selkirk College students to a business competition at Kelowna’s Okanagan College. The flames for his brewery idea were stoked when, during a break in the action, Konkin got to know part-time Okanagan College instructor Dan Allen who started Big Surf Beer Co. in Kelowna. With encouragement from his new friend, by the end of the weekend Konkin had reimagined his business plan and enthusiastically jumped into a new endeavor.

“My expertise is that I am really good at building a structure for businesses and putting a team together,” he says. “I brought in 13 partners with experience in marketing, construction, human resources, governance… I brought together a dream team. Within one year we went from talk of building a brewery to a full functioning operation with licensing, renovation of a building and hiring 15 staff. You couldn’t pull that off in most places.”

With more than 135 small breweries found in communities all across British Columbia, Konkin and his team were not interested in getting cute with a bunch of wild flavours and funky ingredients. When they looked at the massive beer market, the large majority of consumers prefer the basics— products like Molson Canadian, Kokanee and Budweiser. In the giant steel tanks that are key to the brewpub vibe, the majority of the beer that flows out of them is more about quenching thirst than re-inventing the wheel.

“For most craft breweries, it’s against their religion to brew something like that,” Konkin says with a smile. “We decided that we were going for blue collar craft with high quality ingredients. Most of the people who taste our beer, they just want something easy drinking.”

Keeping an Eye on the Future

Though still in the early days, the initial success of the Trail Beer Refinery and the opportunity to expand the market well beyond the shadow of Teck is keeping Konkin on the run. Despite the demands of a bustling new business, Konkin thrives in a fast-paced environment (he still manages 40 corporate tax returns a year) and will continue teaching at Selkirk College.

As he has done with his previous real-world experience working in corporate Vancouver, Konkin has brought his latest venture into the classrooms of the Castlegar Campus where he uses the Trail Beer Refinery as an academic resource.

“You can take a look at almost any course in business and you can build a case study someplace in this brewery that can be used in that,” says Konkin. “There are so many decisions that need to be made and to bring that into the classroom, it becomes relatable to students. It’s small enough that you can make it more understandable versus some global multi-national company that has so many moving parts that it’s hard to get your head wrapped around it. And when you talk about beer, it’s just that much cooler.”

Still only 46, Konkin expects his teaching career is only just beginning.

“Teaching keeps you young,” he says. “New students constantly arrive and you are stuck in time because people graduate and then a new cohort comes in and they are the same age. I like when students come to my office and just talk about some of the ideas they have. It’s fun to get to know your students and see how what you teach them in class contributes to their success.”

Within the lessons he teaches a new generation of business leaders, Konkin is able to convey something a little extra. With his feet firmly planted in the community that raised him, Konkin is proud to bring a new energy to his hometown.

“We turned an ugly building that was an eyesore in the middle of town into the nicest and coolest place in town,” says Konkin. “This was a catalyst and I think it has helped the confidence level in downtown Trail because there is more investment taking place all around us now. This is Trail’s brewery and we’re happy to make it a reality.”

Learn more about the Selkirk College Business Administration Program and join us on Facebook.