Now working for a small company on the cutting edge of new technology, Landry is able to put his education to good use. 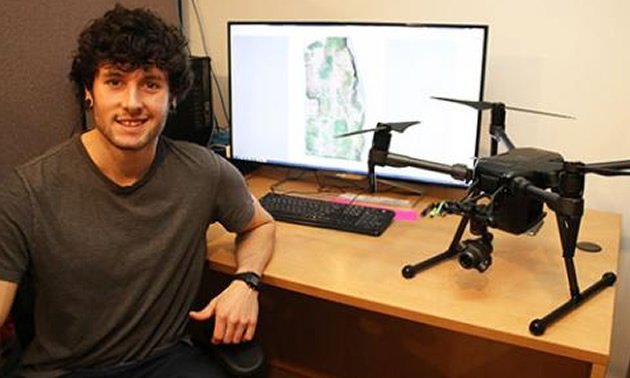 With time spent in the field and at the office, Selkirk College alumnus Alexandre Landry works in an exciting career at Nelson’s Harrier Aerial Surveys. Landry graduated from Selkirk College in 2017 with a Bachelor’s Degree in GIS. — Photo courtesy Selkirk College

A geospatial analyst for Nelson’s Harrier Aerial Surveys, Landry is part of a team that provides high-precision surveying, geographic information system (GIS) data and remote sensing services to a diverse range of clients across the province. The majority of the data collected and analyzed by Landry is gathered using UAVs, more commonly known as drones.

“The job is not in any way mundane, there is always a new challenge,” says the 26-year-old who works out of an office in downtown Nelson when he is not in the field. “You have to stay up to date with new technology, new software and all kinds of cool new functionality that opens up possibilities on what seems like a monthly basis.”

Customers come to Harrier seeking accurate data for projects that require minute detail. They work with companies involved in forestry, mining and architectural firms where they can survey complex terrain and provide modelling or aerial imagery for project planning and design.

“It’s satisfying and fun to get really good data out of these machines and work with the immersive, real world data that you are collecting yourself,” says Landry. “You can really relate to the information you are analyzing.”

Originally from Montreal, Landry began his post-secondary journey at Concordia University where he was studying in the Geography & Urban Planning Department. During his first two years of study, he was introduced to the field of GIS and his imagination was captured. Wanting to focus more on GIS, Landry did a quick internet search and discovered what he was looking for with Selkirk College’s School of Environment & Geomatics.

With a fondness for British Columbia and the outdoor recreation the West Kootenay provides, Landry packed his bags and headed west. He transferred his credits to the Advanced Diploma in GIS Program based out of the Castlegar Campus and started to focus on his passion.

“I was super impressed by the quality and calibre of teaching, and how much we managed to cover in so little time,” Landry says of his first year at Selkirk College. “The Advanced Diploma in GIS is fast paced, but very supportive and sets you up very well for career opportunities.”

After graduating from the one-year diploma program, Landry took advantage of opportunities available through the Selkirk College Co-op Education & Employment Services and landed a position with the Ministry of Forests, Lands & Natural Resources out of Cranbrook. He returned to Selkirk College to complete his education, spending one more year of study to earn a Bachelor’s Degree in GIS.

Landry says the two years he spent at Selkirk College was a immersive experience that would have been unlikely at a larger post-secondary.

“Students are well supported by teachers and learn collaboratively with other classmates because it’s such an intimate environment,” he says. “You are not in big lecture halls where you feel alone, we were able to help each other out. The teachers were then able to have lots of time with students individually and we are able to share our learning together.”

After graduating in 2017, Landry spent time working on smaller projects at the Selkirk College’s Applied Research & Innovation Centre (ARIC) in Castlegar before catching on with Harrier Aerial Surveys. Now working for a small company on the cutting edge of new technology, Landry is able to put his education to good use.

“Adding a spatial element to data can allow you to be more creative and produce very valuable information,” says Landry. “Developing a level of literacy with spatial data will be a benefit to most tech professionals, regardless of the specific sector you work in since GIS will only continue to become more widely integrated into every sector of the economy.”

In a career area with a bright future, Selkirk College’s unique focus on GIS pathways sets graduates up for success in a broad range of industries and fields.

“Graduates with GIS literacy can thrive significantly more in understanding how data is related to any project,” says Landry. “People from a wide array of backgrounds can benefit greatly from this program to compliment their degree or other post-secondary backgrounds.”