Selkirk College bursaries provide optimism in the face of challenge 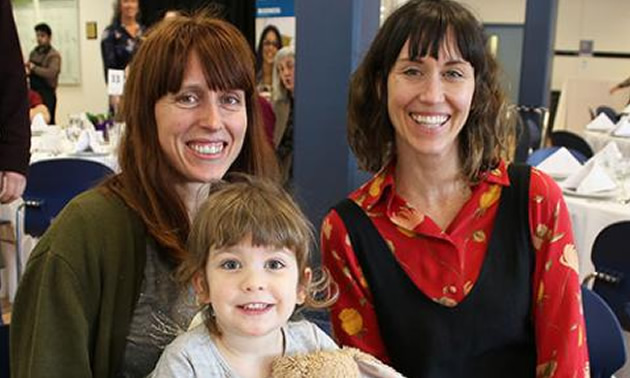 Embarking on an educational journey takes a large dose of determination to be successful. Pushing off on a four-year Bachelor of Science in Nursing pathway as a single mom with a three-year-old daughter requires resolve and courage.

First-year Selkirk College Nursing Program student Meghan Stewart made the decision to return to school at the age of 39 because she wanted a fulfilling career that would also provide a brighter future for her daughter Ruby.

“There were times in the first semester that I would be crying into the noodles I was making my daughter for dinner,” Stewart says of the stress over not only learning, but also the financial challenges of a full-time student. “She would ask me if I needed a hug and a stuffie. Then she would say, ‘Don’t worry mom, in a little bit it will get better.’ Because that’s what I say to her when she stubs her toe or skins her knee.”

The wisdom of her three-year-old daughter was realized late in the first semester when Stewart received an email from the Selkirk College Financial Aid Department informing her that she would receive three bursaries. Already exceeding her own expectations on the educational side of the equation, the financial stress was eased through the kindness of donors.

“We learned a lot in the first semester about the social determinants of health and how there are varying factors that create vulnerability to illness and disease,” she says. “Areas of your life like employment, job security, working conditions, food security, social inclusion, income… donors are actually contributing to a person’s holistic health. Is there a greater gift than that?”

Stewart’s parents met while going to school in Nelson at Notre Dame University in the late-1960s. Her father played for the hockey team and graduated with a Bachelor of Education, moving onto a career in the local school system that included a stint as vice-principal at Trafalgar Middle School.

When Meghan was five, the family moved to Alberta after her father became the executive director of Canadian Red Cross in Calgary. After high school, she attended Mount Royal College, graduating from the Recreation & Business Program while captaining the school’s cross-country running team.

Stewart had been coming to the Nelson area in the summers while growing up and the lure of mountain life soon brought her back. In the winter, she worked in the ski industry in a variety of different positions, including a tail guide for local cat ski operations. In the summer, she was a tree planter.

“The moments are empty at times,” says Stewart, who is an only-child. “Their birthdays come and you have this love that you don’t know what to do with. There is no one that can replace that relationship you had with them. It’s tough in the pinnacle moments and the low ones too.”

In Search of a Brighter Future

Stewart always had her eye on becoming a nurse, but felt she didn’t have a strong enough foundation in math and biology. After gaining a more intimate understanding of nursing through both her parents’ crises and her work as a health care assistant, Stewart decided her life experience was enough to overcome any shortcomings.

“I realized I have life-long learning and in the nursing profession, the learning never stops. It finally made sense and was time to pursue it,” says Stewart, who currently lives in Rossland. “I could have done this in 2005, but I wouldn’t be the person I am now so I don’t have any regrets. What I bring to my practice now, after going through everything that I have, is invaluable. This is truly the right time to be doing this.”

Though confident in her desire to become a nurse, Stewart’s decision to return to school was not easy. Her parents were divorced and remarried. Neither had a will, so Stewart does not have the benefit of an inheritance. The financial strain of being a single parent did not make it any easier.

“Every once in a while I think: gosh, I should have been doing this before I had a child,” says Stewart, who named her daughter Ruby because that was the stone in her father’s Notre Dame University ring. “That might have been practical, however, I might not have had the push that I needed to really get this done. Yes, I really want to be a nurse, but there is more to it because I don’t know how to survive in this economy without making a career choice like this. I have to look at the future and I’m not sure I realized that before I had this little girl looking up at me everyday.”

The Kindness of Donors

When she was accepted to the Selkirk College Nursing Program, Stewart knew the cost of four years of post-secondary education would be daunting. Access to scholarships and bursaries was not an option, it was a necessity. Not surprisingly, Stewart was emotional when informed she would receive the Columbia Basin Trust Bursary, Southern Interior Development Initiative Trust Bursary and the Castlegar Rotary Club Bursary.

“I was elated,” she says. “I opened the email while I was at school and didn’t want to make a big deal about it, but when I got to my car I just sobbed. It was such a relief and the stress was immediately lessened. My car can break down if it needs to, before it couldn’t because I don’t know what happens then. I now have that safety net.”

Heartened by the support of others, Stewart’s boldness to overcome the challenges that lay ahead is even stronger than when she started.

“Nothing happens fast, the road is long,” she says. “The best things in life don’t come quickly and easily. This journey is going to show my daughter what courage and determination look like. You can’t tell people, you have to show them so they can watch you go through it.”

Stewart and 140 other Selkirk College students from a variety of programs received their bursaries at the annual Bursary Tea that was held on February 2 at Mary Hall on Nelson’s Tenth Street Campus.

Learn more about the Selkirk College Financial Aid and join us on Facebook.