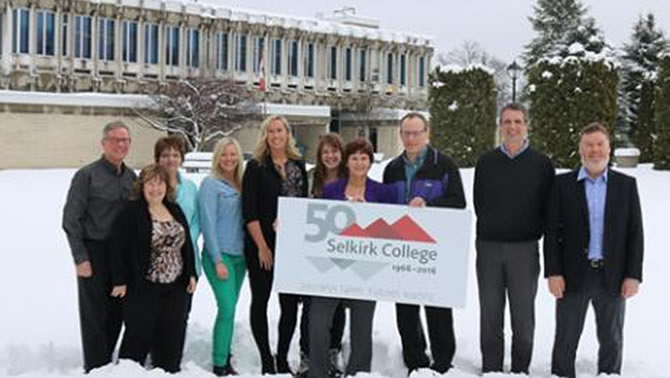 Members of the Selkirk College 50th Anniversary Committee stand in front of the Castlegar Campus with a new logo that recognizes five decades of post-secondary in the West Kootenay-Boundary. — Photo courtesy Selkirk College

With the arrival of 2016, Selkirk College is preparing for a year-long golden anniversary celebration that will dive into the past, embrace the present and look towards the future.

Fifty years ago, a new chapter in learning began for the West Kootenay-Boundary. With enthusiastic support from residents across the region who desired access to post-secondary education close to home, Selkirk College opened its doors in September, 1966.

Five decades later, British Columbia’s first regional rural college continues its mission to inspire lifelong learning, transform lives through education and training, and serve the communities who backed it from the start.

“It’s been an incredible journey to this point,” says Selkirk College President Angus Graeme. “When you think about all the lives and families that have been impacted over the last 50 years because community leaders and forward thinkers in the early 1960s had the vision to make Selkirk College a reality. We are humbled every day to be able to continue this important work for the people of our region and looking forward to celebrating this anniversary with all of the communities we serve.”

A College Created by Community

The push to establish a regional college in the West Kootenay-Boundary began in 1962 and was rewarded in February, 1965 when 72 per cent of electors in the region voted in favour of establishing a college in a referendum. At the time of the referendum, the regional college incorporated six districts that included Trail, Nelson, Castlegar, Slocan, Grand Forks and Arrow Lakes.

Selkirk College opened its doors in September, 1966 with 458 charter students taking classes in the old bunkhouses at the Celgar Pulp Mill as construction of the Castlegar Campus concluded that first fall. The campus was completed and officially welcomed students in January, 1967.

“Selkirk College has a rich history and that will be an important part of our 50th celebrations,” says Graeme, who began teaching at the college in 1992 and now serves as Selkirk’s eighth president. “But what we have planned goes beyond simply marking a date on the calendar, it’s a time to celebrate what we are today and what we will continue to be into the future.”

The Selkirk College 50th Anniversary Committee has been working for several months on plans that will build excitement for the historical milestone. Starting with the kick-off at the annual Bursary Tea on January 30 at Mary Hall on the Tenth Street Campus in Nelson, there will be several events and projects that take shape over the next 16 months.

The main event is the Homecoming Weekend Celebration set for September 16 to 18 which will bring together current staff and students with alumni, retirees and community supporters. In April, 2017 the Class of 2017 will be recognized as the 50th Selkirk College grad class to march across the stage and into their futures.

Stories from the last 50 years will be told over the course of the next 16 months, culminating with a commemorative coffee table book that traces the highlights of the last five decades. Funds will also be raised throughout the year to establish a $50,000 scholarship/bursary which will provide a legacy of financial support for future students.

“This is an exciting time to reinforce to our communities the importance of post-secondary education close to home,” says Maggie Keczan, Selkirk College’s Marketing Manager. “The Homecoming Weekend Celebration is the big event, but there will be plenty more opportunities in the next 16 months for community members to get involved in helping mark and celebrate this important occasion.”

Find out more about the Selkirk College 50th Anniversary Celebration and join us on Facebook.