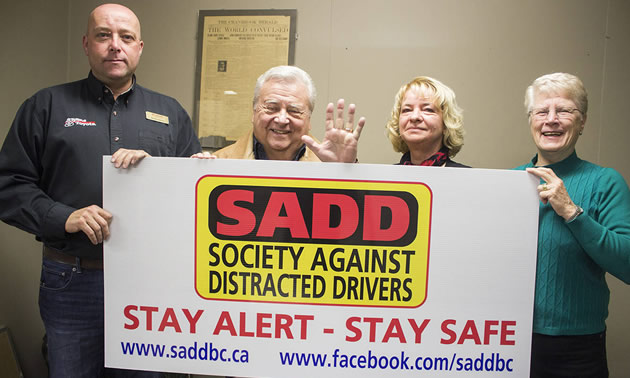 It’s sad but it sounds like SADD has come to the end of its road. SADD is the acronym for the Society Against Distracted Drivers, a non-profit organization co-founded in Cranbrook by well-known resident and businessman, Brian Kostiuk and RCMP auxiliary constable Bruce Smith along with executive administrator, Karin Dietrich, who donated countless hours to the organization.

The organization was inspired after Brian Kostiuk was a victim of several close calls on local roads because of driver inattention or distracted driving. He points out that it is a serious and growing problem in British Columbia with an average of 78 people dying in motor vehicle collisions due to distracted driving every year.

It has been documented that 25% of all car crash fatalities are the result of driving distractions, with the most common problem being talking on a cell phone or texting while driving. Other distractions include personal grooming, eating/drinking, reading, pets, other passengers or not knowing your route.

According to recent statistics from Kootenay MLA Tom Shypitka’s office distracted driving is also a growing problem in the East Kootenay.  For example, in 2018 there were 90 distracted driving violations ticketed in the Columbia Valley, 258 in the Kimberley/Cranbrook area, 63 in Yahk/Creston and 184 in the Elk Valley region – bringing the total to 595.  The MLA’s office pointed out the substantial costs associated with distracted driving as the cost currently for such a ticket is $368, plus each violation comes with four demerit driving points which adds an equivalent insurance cost increase of $178 to the charged driver. With fines and points combined distracted driving cost East Kootenay drivers $324,870 in 2018.

“Unfortunately, we can’t sustain the SADD organization. We talk to people and they all agree distracted driving is bad and dangerous but we aren’t getting much more than lip service,” said Brian Kostiuk, president of SADD, commenting on community outreaching programs they have conducted.

“When we started we had hoped that through individual and corporate donations, we could sustain SADD and make a real difference in fighting the hazards of distracted driving,” he said. “However, despite the prevalence of the problem, it doesn’t appear that there is much community support for the idea of combating the issue of distracted driving in the Kootenays.”

Kostiuk has announced that he is shutting down the SADD organization, but he still hopes that some individual, organization or group will take up the cause.

“Distracted driving is killing us, literally,” said Brian Kostiuk.  “I would love to see someone step up and take this imitative over, we have established the groundwork to fight this issue.”

You can contact Brian Kostiuk at [email protected] for more information.