Revelstoke’s A&W set for demolition: to be replaced with new A&W building

The current A&W restaurant in Revelstoke hails back to the 1960's, when Highway #1 was pushed through the Rogers Pass. 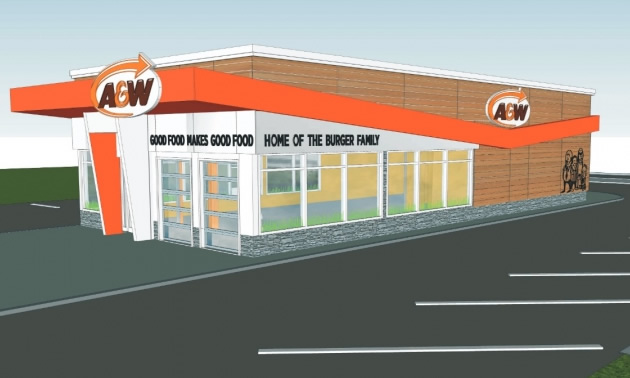 It's out with the old and in with the new as the City of Revelstoke looks to approve an application which will see the longstanding A&W building on Highway #1 razed and a new contemporary structure built in its place.

Corporately, A&W has been on a push to modernize and revitalize many of their restaurants across Western Canada, and the Revelstoke A&W is set to be modernized starting in the spring of 2019.

The current A&W restaurant in Revelstoke hails back to the 1960's, when Highway #1 was pushed through the Rogers Pass. The fast food restaurant has been renovated several times over the years, with the current building slated for demolition in the near future.

Edmonton-based design firm William Rutledge Architect submitted the plans and rendering to the City for approval.

Here is part of A&W's corporate statement, "In many communities, A&W was the first nationally branded restaurant in town. Because we were there first, our drive-ins served as "the place to be" in town. In fact, millions of Canadians today still carry vivid memories of special moments in their lives that took place at their local A&W drive-in. Whether they were kids in the back seat of the family sedan, or just hanging out with their best friends on a Friday night checking out the hot cars, Canadian baby boomers grew up with A&W. It's an enduring friendship that is the source of A&W's continued success across Canada.

Since then, A&W has continued to grow, expanding into over 850 locations from Vancouver Island to Newfoundland. At the heart of that growth is the fact that, while so much of our world has changed, the simple things that made A&W so popular in its early days are the same today. We still serve A&W Root Beer® in frosted mugs. Our onion rings are made fresh from whole onions every day. And our Burger Family burgers are still made with fresh, quality ingredients."

No exact date for the re-opening of the Revelstoke A&W location has been given at this time.