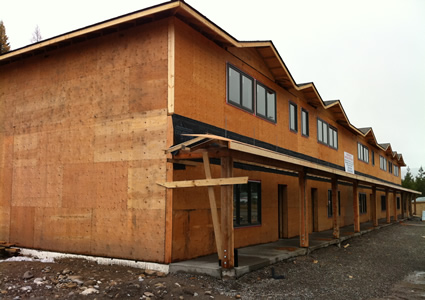 A new commercial building is being built on Sparwood's busy commercial strip by Realtor, Rick Pater, of Elk Valley Remax.

The building features five or six bays of 1,200 square feet each with a 350-square-foot mezzanine included. Upstairs suites are allowed in the commercial building.

The builder is Nick Petkau of the Elk Valley's Golden Eagle Custom Homes.

The commercial bays will be for sale or rent, starting at $199,900. Completion of the new commercial building is slated for 2013.

This is one of a number of commercial building projects happening the Sparwood/Elk Valley region, which speaks to a shortage of commercial space and an increased demand for such space brought on by the coal mining industry embarking on aggressive expansion plans of their own.

Rayco Steel is undergoing a major office and facilities expansion and Fabrite, a Cranbrook-based fabrication company has broken ground on a new shop beside Sparwood's TimberMart. It would appear groundwork is starting on the new Best Western hotel complex near Sparwood's big truck.