New chemistry labs at Selkirk College a catalyst for learning

$875,000 was invested in the labs—learning is enhanced and a safe, inviting environment welcomes students. 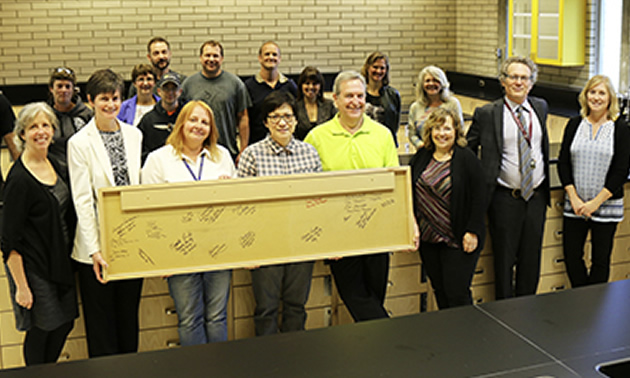 Selkirk College recently unveiled the first of two chemistry labs seeing a major renovation to bring them into the modern era. The old labs dated back 50 years to the original construction of the college and the new facilities are an exciting addition to a growing field of study at the local institution.

Chemistry is a hands-on discipline and with newly renovated state-of-the-art labs opening this spring at Selkirk College, students enter an exciting new era of learning.

The two old chemistry labs on the Castlegar Campus were well-maintained and functional, but dated back 50 years to the original construction of the college. They were in dire need of a renovation and now with $875,000 invested in the labs, learning is enhanced and a safe, inviting environment welcomes students.

“They looked like the set from a 1950s sci-fi movie,” says David Feldman, the Dean for the School of University Arts & Sciences. “We have really brought our facilities into the 21st Century.”

“We were finding our science facilities stretched to the limits,” Feldman says.

Selkirk College Chemistry instructor Elizabeth Lund says that one of the greatest limitations of the old labs was the fume hoods – there were too few of them and they were outdated.

“It was getting prohibitively expensive to run some of our courses because of the lab facilities,” she says. “The quality of the fans and the age of the fans were a big part of that.”

Overcoming Limitations to Forge Ahead

It was with these fume hoods in mind that Ron Zaitsoff, Director of Facilities, started applying for funds. The chemistry lab renovation had been proposed for a number of years, but capital had been difficult to secure. With his eye on Ministry of Advanced Education funding trends, Zaitsoff got creative.

“I saw that the Ministry was funding more basic mechanical or electrical upgrades and so I applied to replace the fume hoods and was successful,” he says. “That started it all for us.”

Through a combination of successful funding applications and a resourceful use of the maintenance crew to do the construction, Zaitsoff was able to start the renovation in November 2015 with asbestos removal the first priority. Nearly $100,000 was spent ensuring the health and safety of the spaces for faculty and students. It was a big challenge, says Zaitsoff.

“It hadn’t been harming students, but it’s something we don’t want in the college,” he says.

The labs were completely gutted and in one room a wall was removed to increase floor space. New fume hoods and ventilation equipment were installed along with new plumbing. All cabinetry was replaced with specialty birch and the countertops are brand new on movable workbenches for greater flexibility. Sound board on the walls was changed and new flooring was added. Modifications were also made to the space between the two labs to create a chemical preparation room, an invaluable addition for students and the faculty assistants who do the majority of the prep work.

The old labs had 10 fume hoods. Now, there are 14 modern hoods with flow sensors and alarms to ensure enough air passes through to exhaust fumes properly.

“That’s a feature we never had before,” Zaitsoff says.

The labs also now have an emergency gas shut-off feature.

“If students use Bunsen burners or natural gas and something terrible happens and it catches fire or falls over, there are emergency stops at every exit door so you just punch a button and it shuts off the gas flow to the lab,” says Zaitsoff.

A Vibrant and Modern Atmosphere

The labs now also have greater wheel-chair accessibility and feature glass doors and windows to “open them up and make them bright and airy.”

Lund says the new atmosphere is wonderful and she looks forward to years of teaching in the renovated labs. In their first two years of study, Selkirk College students say they have had access to equipment such as UV-Vis spectrometers, GC, pH probes and analytical balances, and instruction that takes them further than those studying at larger institutions. The new lab space has allowed this to continue in a greater capacity.

“I’m excited for students to have a space that’s vibrant and modern and makes them want to be in it,” says Lund. “I’m thankful for the workmen who put love into the project with every little detail cared for.”

Learn more about the School of University Arts & Sciences and join us on Facebook.