The new development is next to Nelson’s community complex and will have a walkway connecting the two properties. 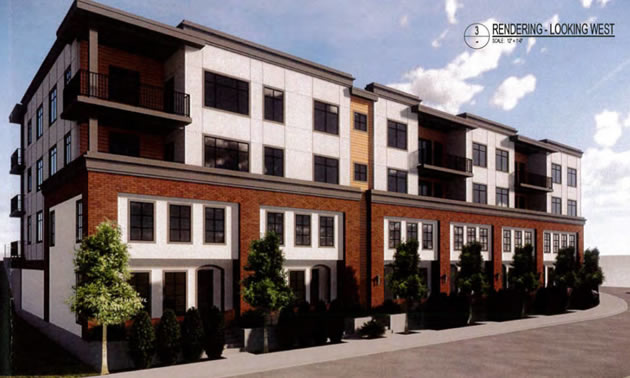 The proposed development in Nelson will feature one and two bedroom units, underground parking and four commercial/retail spaces on the ground floor level. — Photo: City of Nelson

According to applications to the City of Nelson, Kelowna-based developer Culos Development has applied for and has been given tentative approval to build a new 38 unit residential/commercial building fronting Nelson’s busy Front Street and adjacent to Hall Street.

Culos Developments, owned by Michael Culos, had purchased the land for the development from the City of Nelson previously in $960,000 deal. In addition to 22 two-bedroom units in the proposed development, there will be ten one-bedroom units, underground parking for 65 vehicles and four commercial/retail spaces at the ground floor level.

The new development is next to Nelson’s community complex and will have a walkway connecting the two properties. No timeline has be given for the project’s start, though another public hearing is slated, before final approval is rendered.

Culos was the developer of another Nelson project, Anderson Gardens, which is a 33-suite residence completed in November 2012 — a facility constructed for the Canadian Mental Health Association of the Kootenays.

Michael Culos formed Culos Construction Ltd. in 1980 to build single family homes in Kelowna, B.C. Since that time, Culos Group of Companies has grown to a full service development company with a lengthy repertoire of multi-family residential construction, residential subdivisions and single family homes. Mr. Culos has also established a number of successful corporate enterprises in the helicopter, courier, and restaurant industry, in addition to an ownership interest in a retail liquor store in Kamloops, B.C.