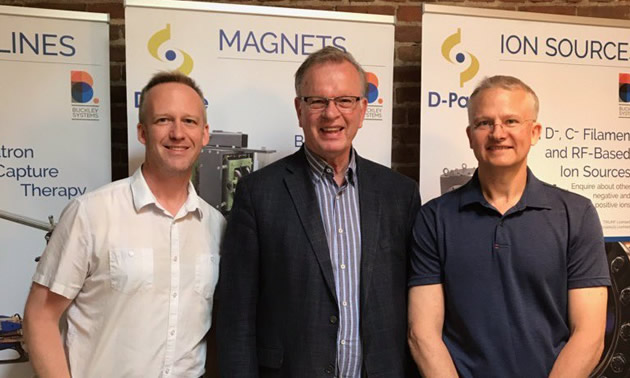 It was congratulations all round when Bruce Ralston, BC's Minister of Jobs, Trade and Technology, recently made a quick but official visit to local West Kootenay high tech company D-Pace. D-Pace is a Nelson-based company, which just secured a $1 Million USD contract to develop and test an ion source system.

Owner and founder Morgan Dehnel started his D-Pace company more than two decades ago (founded 1995). He has grown his staff to more than 15 full-timers, as well as additional team of on-demand freelancers. D-Pace works with more than 165 clients worldwide.

“In my mind, it’s the commitment it’s taken, and continues to take for over 25 years . . . that’s a remarkable focus,” said BC Minister Bruce Ralston stated while speaking with founder Morgan Dehnel on the tour of the Nelson-based tech manufacturing company.

“I’m pleased to say that D-Pace is moving towards our vision and aspirations of not only providing consulting services and individual devices for the particle accelerator market but providing complete systems that have a much higher dollar value,” Dr. Dehnel, D-Pace’s Chief Science & Innovation Officer pointed out during the tour by Mr. Ralston.

Morgan Dehnel stated that D-Pace’s success is an excellent example of a tech company thriving in the Kootenay region while working globally from a small-town in British Columbia like Nelson.