The Heritage Conservation Plan focuses on the character and defining elements of the building. 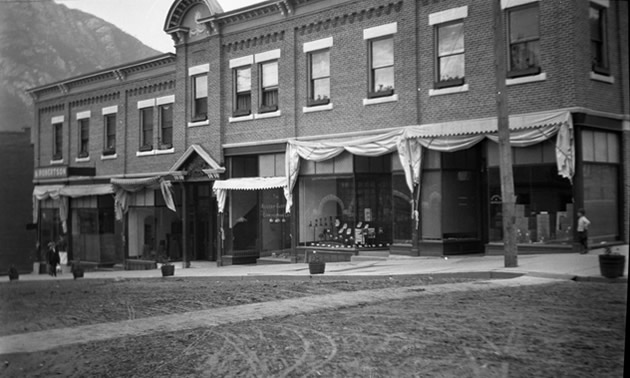 Nelson CARES is excited to announce that Phase I of a large heritage restoration project is underway at Ward Street Place (Annable Block) located at 567 Ward Street. After a Statement of Significance was completed on the 107 year old building in January 2019 a Heritage Conservation Plan was created. This plan recommended restoration to the following historical features of the building facade: restoration of the commercial display windows, doors, bulkheads, rebuilding of the roofline cornice and the installation of a new awning system.

Ward Street Place (Annable Block) was constructed in the Edwardian style as a dual purpose commercial and residential building and it remains true to this historical purpose. The building is named after the developer and owner John Edward Annable, a longtime resident of Nelson. The building was purchased by the community through Nelson CARES in 2002 as affordable housing in the downtown core. Nelson CARES added seven residential units in the basement bringing the total affordable housing units in the block to 45. A major interior renovation, thanks to community donations, has been underway since 2014 and included the installation of a fire sprinkler system and massive upgrades to all the rental units.

Nelson CARES receives no public funding for the building and operates it as a social enterprise with the rents collected from the 7 commercial units being invested to support the affordability of the residential units.  It is a unique affordable housing model in the province of BC. It is the last low income housing in Nelson’s downtown.

Ron Little, Nelson CARES Board President, said “Our commercial tenants are crucial to ensuring the residential rents are kept low and the building is sustainable over time. This investment from Columbia Basin Trust and Heritage BC, will ensure the commercial units remain attractive to retailers and continue to add to the beautiful historic landscape of downtown Nelson.”

The Heritage Conservation Plan focuses on the character and defining elements of the building. Sourcing archival photographs from the Touchstones Nelson Museum of Art and History archives, the restorations will stay true to the authentic look and construction of the building.

During the conservation assessment it was discovered that numerous features of the building are original to the 1912 construction, including display window transoms, most entry doors and opaque Florentine glass. This first phase of restoration will focus on improving the safety and security of the building while maintaining these Edwardian features. This will include:

Jenny Robinson, Executive Director of Nelson CARES has this to say about the project, “We are so grateful to Columbia Basin Trust and Heritage BC for this grant and their expertise in guiding this work. We have invested in this building as a community and we are overjoyed to bring the Annable Block back to its glory days! And we now understand the historical significance of the site, it is a gift to the community.”

Renovating and restoring a building that is over 100 years old takes a team of skilled trades people. This will ensure that the structure is preserved so it will be viable for decades to come. Work will continue through 2019.

This project is funded by Columbia Basin Trust in partnership with Heritage BC and Nelson CARES.

The  Statement of Significance and the Conservation Plan can be found on the Nelson CARES Society website.