Mining: down but not out

Even in a slump, mining makes an enormous contribution to Canada’s economy 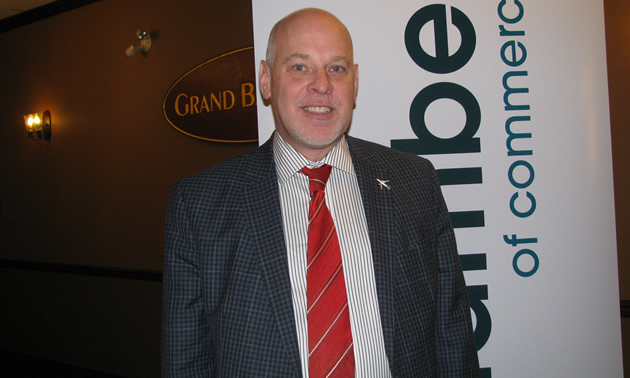 Pierre Gratton, president and CEO of the Mining Association of Canada, spoke at the chamber of commerce luncheon in Cranbrook, B.C., on March 1. — Marie Milner photo

Pierre Gratton, president and CEO of the Mining Association of Canada (MAC), admits he doesn’t have a crystal ball allowing him to see the future. However, his experience leads him to believe that in spite of tough economic times, the Canadian mining industry’s economic prospects will be strong over the medium and long term.

Gratton was the keynote speaker at a luncheon for the Kootenay region chambers of commerce members held in Cranbrook on March 1. His talk touched on the overall slowing of the global economy and how the lowered demand for commodities, including coal, is affecting the Kootenay region.

However, Gratton said, mining accounts even now for about 20 per cent of the overall value of Canadian exports, and mining and mineral processing are directly employing more than 375,000 Canadians, including about 10,000 aboriginal Canadians.

In this country more than 3,700 companies provide services to the Canadian mining industry. In addition, mining pays an average of $3.8 billion annually in corporate taxes and royalties; in B.C., Teck’s steelmaking coal mines pay over $1 billion to local communities through procurement activities alone.

“To prepare for the next upswing,” Gratton said,”we need to ensure that Canada is in position to compete for highly mobile global mineral investment. Both industry and government—federal, provincial, territorial and First Nation—have a role to play in retaining Canada’s leadership in mining.”

Gratton spoke about the issues that should be addressed in preparation for that anticipated upswing, including:

“To expedite the development and implementation of innovative technologies, we believe significant opportunity exists for industry and government to pool resources and address innovation priorities together.”

Gratton went on to say that MAC and its members recognize that building respectful and sustainable relationships with local aboriginal communities is essential to successful and responsible project development. Building mining and aboriginal partnerships takes time. Trust must be built between the parties, and aboriginal communities rightly want to understand the nature of the physical and environmental impacts of the proposed mine before it proceeds.

“At MAC, we believe that trust can only be built through our performance,” Gratton said. “When done right and in partnership with aboriginal communities, mining development can generate significant opportunities and benefits for communities across the country.”