The Balmer Mine explosion took place on April 3, 1967 and took the lives of 15 miners. 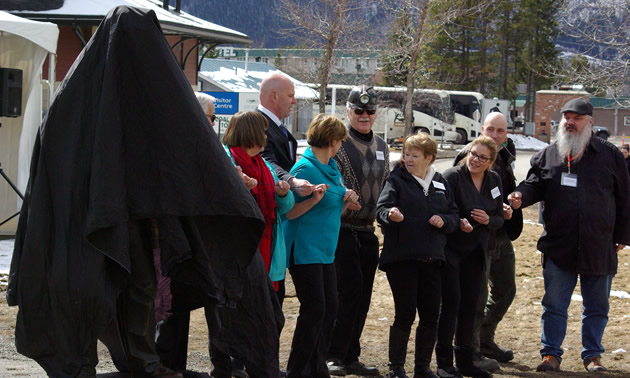 The unveiling of the memorial statue was attended by local area dignitaries and representatives. — Photo courtesy Robert Hawkins, Mining and Energy

On Monday, April 3, 2017 a ceremony commemorating the 50th Anniversary of the Balmer North Mine Explosion in British Columbia's Elk Valley took place in Sparwood. Robert Hawkins, a representative of Mining & Energy magazine attended the ceremony and here are some of his observations.

"The memorial and dedication ceremony was well attended with hundreds of people there to pay their respects to lost friends and relatives, as well as to witness the unveiling of the new sculpture," said Robert Hawkins.  "The particular date had been chosen because of it being the 50th anniversary of the tragic Balmer Mine Explosion in 1967, however the tribute given included the many miners who had lost their lives in the valley over the past century or more."

He added, "Many local school children also participated by individually laying white tulips at the foot of the statue as the names and ages of those on the list of 181 fallen workers were read out loud."

The Balmer Mine explosion took place on April 3, 1967 and took the lives of 15 miners.

Teck Resources, owner of the modern-day coal mines in the Elk Valley stated, "This historic incident reinforces the importance of staying focused on our vision of everyone going home safe and healthy every day."