The Jersey Emerald property is located in southeastern British Columbia, 10 kilometres southeast of the community of Salmo. 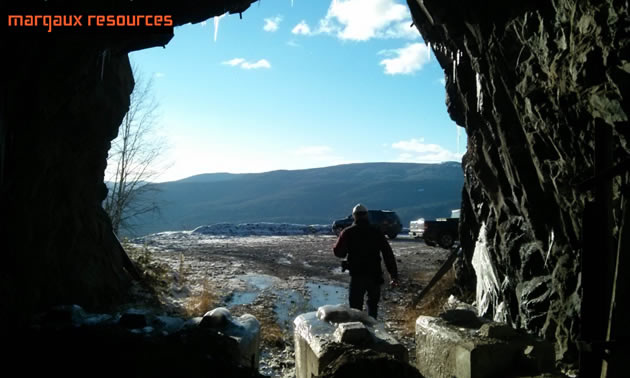 The Jersey Emerald property's first record of exploration dates back to 1895 when it was explored for gold. — Photo courtesy Margaux Resources

Margaux Resources, which bought the property in 2013, is looking at breathing new life into one of the Kootenay’s oldest mine sites.  Press reports indicate that Margaux has announced that a new 2016 drilling program will be conducted to access the mine’s future potential.

The earliest record of exploration in the area dates back to 1895 when gossanous areas on the south side of Iron Mountain attracted the attention of prospectors. The area was initially explored for gold and the 1896 Minister of Mines Report states that assays as high as 100 g/t (3.5 oz/t) gold were obtained. Continued prospecting discovered lead mineralization on the Emerald claims and shipments were made beginning in 1910. In 1938, tungsten and molybdenite mineralization was discovered in skarn bands at the site of the long abandoned gold workings. In 1942 and 1943 the government put the Emerald Tungsten Mine into production to serve the war effort. The mine then remained inactive until 1947 when Canadian Exploration Ltd. (now Placer Dome) purchased the property. Tungsten production recommenced in 1947 and lead-zinc production in 1949. Tungsten production of 1.6 million tons grading 0.76% tungsten was produced from the Emerald, Feeney, Invincible and Dodger deposits. Lead-zinc production of 8.4 million tons grading 1.95% lead and 3.83% zinc was produced from the Jersey and Emerald deposits. The Jersey Emerald property has remained inactive from 1973 when the mine closed until 1993 when the Company optioned the property.