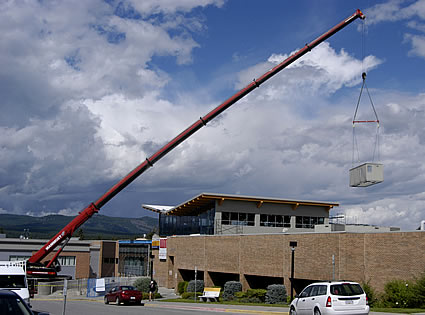 A giant Mammoet crane from Lethbridge, Alberta, was brought in by Wales McLelland Construction to lift two huge air handling units onto the roof of the College of the Rockies Cranbrook Main Campus last Monday. The crane’s maximum extension of 250 feet and 250,000 pounds of counterweight were needed to lift the five-ton units over the wings of the new addition.

Progress on the Knowledge Infrastructure Program expansion at the college was inspected by Prime Minister Stephen Harper on Tuesday, August 10, during his visit to Cranbrook. The $12.7 million expansion is being funded by both the federal and provincial governments.

Interior renovations are nearly complete at the college and departments are gradually moving back into Kootenay Centre from temporary quarters in Summit Hall. The moves will be completed by the new school year starting on Tuesday, September 7, except for the admissions/registration office, which will remain in Room S207 in Summit Hall for a few more weeks.