The BCIC Ignite Program has helped create several success stories since its launch in 2016. 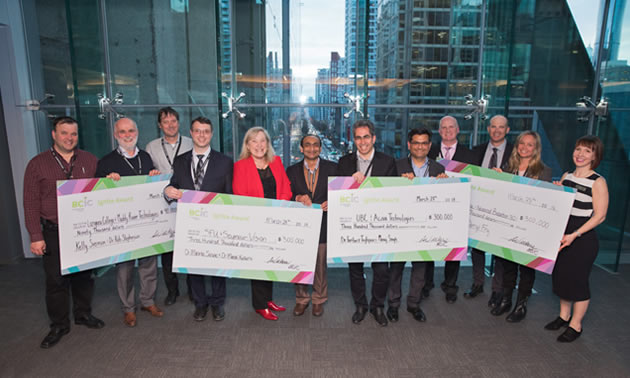 The BC Innovation Council, a Crown agency that drives innovation development and adoption in British Columbia, is excited to announce the winners of its fourth BCIC Ignite Awards. A record total of $990,000 was awarded to four BC research projects that aim to solve industry problems in the natural resources and applied sciences. In total, BCIC has awarded $3.5 million in Ignite funding since the program launched in 2016.

The four projects demonstrated the ability to succeed in diverse fields including environmental engineering, biotechnology, and agriculture. Award criteria is based on commercial and technical viability as well as the ability to be market ready within three years. Research projects must address an industry problem with the potential for significant benefit to British Columbia, and be realized by a group of academic and industry members.

The four awarded research projects, with their academic and industry members, are:

“Each year, BCIC Ignite enables research teams to do remarkable work honing their innovations with industry partners and taking their solutions to market. Each of these projects has the potential to make a real difference for the people of B.C.,” said Bruce Ralston, Minister of Jobs, Trade and Technology. “Congratulations to the 2018 winners who have once again raised the bar with tech solutions that keep our economy strong, sustainable and globally competitive.”

Together with BCIC funding, a total of $3 million is being contributed to the four projects as a result of the unique BCIC Ignite funding model. BCIC Ignite requires applicants to leverage award funds at a ratio of two matching dollars to every BCIC Ignite dollar. More than $11 million, including leveraged funds, has been contributed to BCIC Ignite projects to date.

The BCIC Ignite Program has helped create several success stories since its launch in 2016. Most notably, former Ignite Award winners Jetti Resources secured $24 million in Series A funding and Hydra Energy was named to the 2018 Ready to Rocket list.

“The BCIC Ignite Program helps turn cutting-edge research into ground-breaking, innovative technology that will significantly benefit British Columbia,” says Shirley Vickers, President and CEO of the BC Innovation Council. “Year after year, we see meaningful collaborations between industry and academia that are fuelling economic growth and improving the lives of people across the province.”

Nick Rockel, Editor-in-Chief of BCBusiness, emceed the awards event, which was held at TELUS Garden in downtown Vancouver.

BCIC Ignite is funded by the Natural Resources and Applied Sciences (NRAS) Endowment Fund, which was established by the Province of British Columbia to enhance the quality of life for British Columbians by building strong environments in research and development, advanced training, technology transfer, and commercialization.

Several BCIC Ignite research projects will be featured at the #BCTECH Summit, which takes place May 14-16 at the Vancouver Convention Centre. The 3rd annual Summit is the largest technology event in Western Canada and welcomes Microsoft as returning title sponsor.

For more information about the program and winners, visit bcic.ca/ignite.