The Grand Forks area has been hit hard by severe flooding in recent weeks. 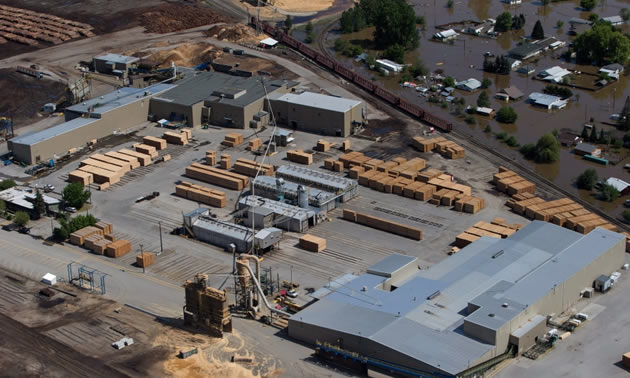 Interfor Corporation has announced that it has resumed operations at its sawmill in Grand Forks, B.C. following severe flooding in the area over the past two weeks.

The sawmill was temporarily curtailed on May 10, 2018 as a precautionary measure due to the escalating flooding in the region. Even though the sawmill was not operating during this time, a series of measures were taken by mill personnel to protect the operation against potential damage. Fortunately, such actions limited the risk to the mill’s infrastructure and equipment and has allowed the mill to resume operations now that the water level has receded. There are ongoing issues in the region related to rail line damage and the Company will be working with its carriers and customers to manage through the related logistics issues.

“I am deeply appreciative of the commitment of our employees whose personal lives were impacted over these past two weeks,” said Andrew Horahan, Interfor’s Vice President, Western Operations. “We are also thankful to the City of Grand Forks for their ongoing support.”

Interfor is a growth-oriented lumber company with operations in Canada and the United States. The Company has annual production capacity of approximately 3.1 billion board feet and offers one of the most diverse lines of lumber products to customers around the world.  For more information about Interfor, visit our website at www.interfor.com.