Harrop II makes its debut in the Kootenays

For the Province's inland ferry fleet, the future is electric. 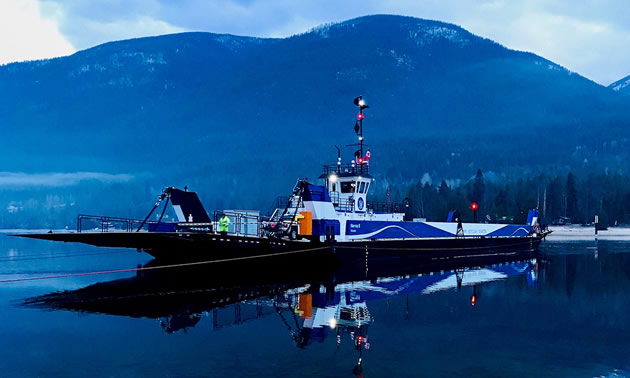 The new ferry can take 98 passengers and up to 24 vehicles, almost double the capacity of the previous ferry. — Photo courtesy flickr.com

A new cable ferry is now in service in the West Kootenays, connecting the local ferry-dependent community of Harrop Procter.

The Harrop II is the third vessel to be delivered under a contract with Waterbridge Steel of Nakusp. In 2016, the company was awarded a $27.9-million contract to design and build four new cable ferries to serve the province’s inland routes. The final vessel, the Arrow Park III, is scheduled to be in service by the end of 2019. The Glade II was added to the fleet in 2018 and the Adams Lake II went into service in spring 2017.

These new ferries are larger and able to carry more vehicles than the ferries they replace, with capacity increased to handle commercial vehicles at full highway loads. While the ferries are docked during off-peak hours, power will be supplied by on-board batteries. This will reduce noise at the terminal and lower the vessels’ greenhouse gas emissions.

For the Province's inland ferry fleet, the future is electric. Electric propulsion has excellent potential for inland ferries where crossing distances are short. The Province is taking incremental steps in this direction as the technology develops to support reliable ferry service delivery. The ministry aims to achieve full electrification of the inland ferry fleet by 2040.