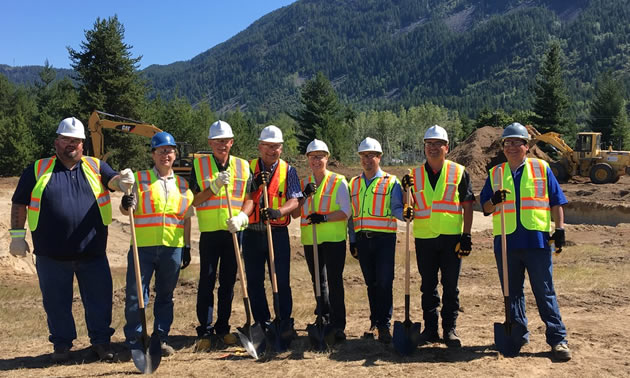 Last week Castlegar was the site of the official ground-breaking of the new and long-awaited FortisBC Kootenay Operation Centre for the West Kootenay.

Among the company management, local dignitaries and civil officials at the official sod turning ceremony — all with shovels in hand — were representatives of three area First Nations.

The centre is being constructed on a 10-acre lot and will be just over 30,000 sq. ft. — two thirds for office space and the rest for warehousing. The new facility will also house Fortis' Emergency Operations Centre. FortisBC says the new centre will allow them to centralize many of its key operations into one location and move some 100 or so employees to the new Operation Centre in Ootischenia, near Castlegar's airport.

Revelstoke-based Vic Van Isle Construction, a well-known regional general contractor, will be constructing the facility with an anticipated completion date of October 2017.