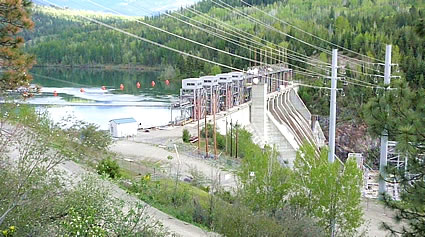 Fortis Inc. announced yesterday that the corporation, in partnership with Columbia Power Corporation and Columbia Basin Trust (CPC/CBT), intends to construct a 335-megawatt (MW) hydroelectric generating facility, the Waneta Expansion, at an estimated cost of approximately $900 million. The facility is sited near the Waneta Dam and powerhouse facilities on the Pend d'Oreille River, south of Trail, British Columbia. CPC/CBT are both 100 per cent owned corporations of the Government of British Columbia. Subject to negotiation and completion of definitive agreements, Fortis will own 51 per cent of the Waneta Expansion and will operate and maintain the non-regulated investment when the facility comes into service, which is expected in spring 2015. Federal and provincial environmental assessment approvals are in place for the project.

The Waneta Expansion will become part of the Canal Plant Agreement and will receive fixed energy and capacity entitlements based upon long-term average water flows, thereby significantly reducing hydrologic risk associated with the project.

The energy, approximately 630 gigawatt hours, (and associated capacity required to deliver such energy) for the Waneta Expansion will be sold to BC Hydro under a long-term energy purchase agreement at prices comparable to those for projects recently accepted by BC Hydro under its 2008 Clean Power Call. The surplus capacity, equal to 234 MW on an average annual basis, will, subject to approval of the British Columbia Utilities Commission (the BCUC), be sold to FortisBC Inc. under a long-term capacity purchase agreement at a price within the range of alternatives outlined in FortisBC's Resource Plan filed with the BCUC in May 2009.

"Fortis is excited about this opportunity to grow our non-regulated hydroelectric generation business in British Columbia, where we have well-established regulated utility operations at FortisBC and Terasen Gas," said Stan Marshall, president and chief executive officer, Fortis Inc. "Fortis, through our operating and predecessor companies, has 125 years of expertise in the hydroelectric generation business. FortisBC and CPC/CBT have a lengthy, successful working relationship resulting from the many years that FortisBC has managed CPC/CBT's hydroelectric assets in the Columbia Basin."

"The Waneta Expansion will substantially resolve capacity shortfall issues for FortisBC and will enable FortisBC to serve its customers with long-term, reliable electricity from a renewable resource," Marshall said. "The hydroelectric generating capacity in British Columbia owned and/or managed by Fortis, including the Waneta Expansion, will exceed 1,500 megawatts.The corporation's investment in the Waneta Expansion will increase consolidated capital expenditures of Fortis by almost 10 per cent to about $5.5 billion over the next five years. British Columbia and the Pacific Northwest region provide good potential to pursue additional hydroelectric generation assets that complement the utility operations of Fortis in western Canada and deliver value to our customers and shareholders."