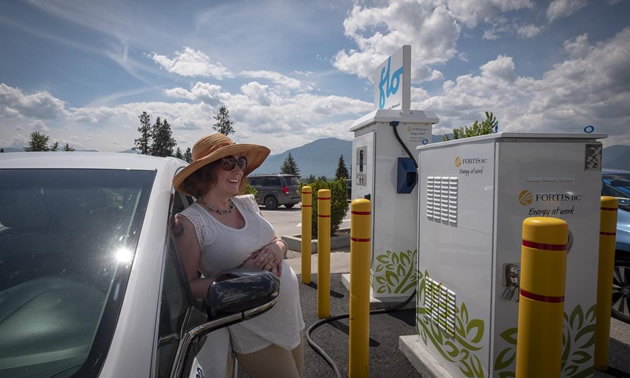 The fast-charge stations are expected to charge a compact electric vehicle in about half an hour, compared to three or four hours that Level 2 station requires. — Photo courtesy FortisBC

Electric vehicle (EV) drivers can now get a fast charge at Kelowna International Airport, as well as 10 other strategic locations across the Okanagan and Kootenays, as FortisBC adds 12 new Direct Current Fast Charge (DCFC) stations to its EV charging network with the help of Natural Resources Canada and community partners.

“Our goal is to make sure electric vehicle drivers can travel with confidence across our electric service territory in B.C.’s southern interior,” said Doug Stout, vice president, market development & external relations, FortisBC. “Putting charging stations where they are needed most helps drive electric vehicle adoption and is part of our Clean Growth Pathway, our action plan to help the province meet its clean energy goals.”

The two stations at Kelowna International Airport will be the first fast-charging stations available at a public location in Kelowna. FortisBC also has the following locations slated for construction over the summer: Rutland Centennial Park along Highway 33 in Kelowna, Kelowna Museum, Beaverdell, Osoyoos, Cawston, Rossland, Nelson, Kaslo, New Denver and Nakusp. According to the manufacturer, these fast-charging stations are expected to charge a compact electric vehicle in about a half an hour, as compared to a Level-2 station that requires about three to four hours. The BC Utilities Commission-approved charge rate is $9 per half hour.

By working in close collaboration with local communities and all levels of government, FortisBC was able to place these stations at locations that ease charging concerns for both short commutes and longer highway travel. For example, the Kelowna Airport is the air travel hub for the wider region, as well as a convenient place to recharge along Highway 97 for those travelling between Kelowna and Vernon or to UBC’s Okanagan campus. The City of Kelowna has contributed the land for these stations, funded 50 per cent for the Airport fast-charge stations and built a Level-2 that they will own and maintain.

“Airports have a large role to play in reducing greenhouse gas emissions and advancing sustainable transportation options,” said Sam Samaddar, airport director, Kelowna International Airport. “We want to make sure the airport is accessible for the growing number of electric vehicle drivers in the Okanagan, and working with FortisBC is an ideal way to achieve this.”

These fast chargers were 50 per cent funded by Natural Resources Canada and 25 per cent by B.C. Ministry of Energy, Mines and Petroleum Resources. FortisBC funded the remaining amount and will own and maintain the stations.

“Electric vehicles are an important part of Canada’s clean energy future and we are committed to support initiatives that encourage widespread adoption of zero emissions vehicles,” said Stephen Fuhr, Member of Parliament for Kelowna—Lake Country. “That is why we continue to invest in infrastructure needed for easy charging where we live, work and play as well as travelling from coast-to-coast.”

"CleanBC is our government’s plan to cut climate pollution, boost the economy, and create opportunities for communities across the province,” said Michelle Mungall, Minister Energy, Mines and Petroleum Resources. “This new series of electric vehicle chargers in B.C’s interior will strengthen our existing robust charging network and ensure we continue to lead the clean energy revolution. More and more British Columbians are making the switch to an electric vehicle with new investments in charging infrastructure and our popular rebate program.”

These stations bring the total FortisBC owns and operates to 17 stations across 14 communities. FortisBC continues to look for opportunities to grow this network. For more information about the FortisBC electric vehicle charging network, visit fortisbc.com/electricvehicle.