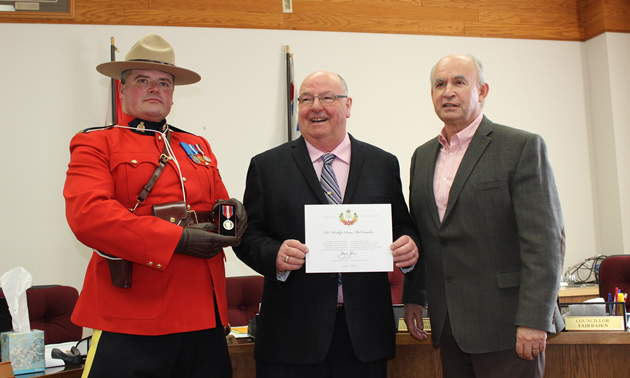 Mayor Dean McKerracher was awarded the Queen Elizabeth II Diamond Jubilee Medal in recognition of the contributions he has made to the District of Elkford. The award was officially presented at the March 25, 2013 regular council meeting by Kootenay East MLA Hon. Bill Bennett.

“It is such a personal honour for me to present this medal to Dean. Dean has distinguished himself for many years as a strong advocate for Elkford. He deserves this commendation and I know all citizens of Elkford join with me in celebrating Mayor McKerracher’s contribution to their beautiful community,” said Bennett.

Through the Federation of Canadian Municipalities, Mayor McKerracher received this distinction for his exemplary efforts and contributions to make Elkford a desirable place to live. The nomination recognizes the important role municipalities – and their elected leaders – play in ensuring our prosperity and high quality of life.

Mayor McKerracher has been an active supporter of the community for 41 years, a member of council since 2002 and mayor since 2005. During that time he has been dedicated to the promotion of Elkford and has a lengthy list of accomplishments. He is most proud of the award-winning Elkford Community Conference Centre, the improved working relationships with the Elk Valley communities and senior levels of government, Elkford’s award-winning branding, the Official Community Plan (OCP) which has received numerous accolades for its focus on climate change and sustainability, one of which was the OCP’s recognition by the United Nations Framework Convention on Climate Change and last, but not least, the continued accessibility and energy efficiency improvements to district facilities such as the upcoming arena/pool project which will include a new ice plant combined with an energy retrofit for the aquatic centre.