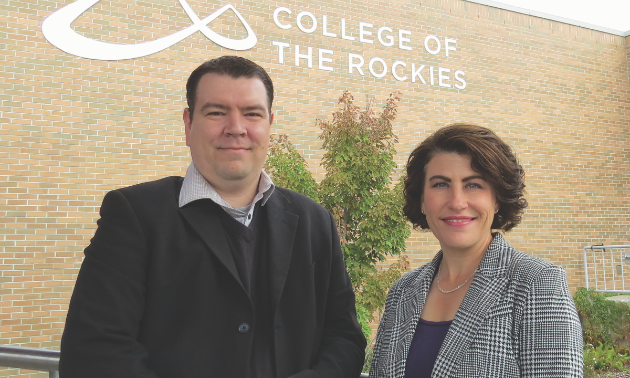 The Board of Governors of College of the Rockies is pleased to announce the election of Jesse Nicholas as Board Chair, and Cindy Yates as Vice-Chair, during its regular meeting held September 12, 2017.

The Province appointed Nicholas to the College Board in July 2014. He holds a Bachelor of Social Science in Anthropology and is currently the Communication Manager for the Ktunaxa Nation Council. Prior to his work with the Ktunaxa Nation, Nicholas was a faculty member at College of the Rockies.

"Jesse is familiar with the workings of College of the Rockies through his time on the Board and his previous work with us,” said President and CEO David Walls. "He understands the challenges and opportunities that lay ahead, and possesses the abilities, experience, knowledge and passion that will be necessary to move the Board and the College forward. I look forward to working with him in his new leadership role."

Joining Nicholas in a new leadership role is Cindy Yates, who was elected Vice-Chair. Yates has served on the College Board since July 2014, and is currently an investment advisor and certified financial planner for RBC Dominion Securities.

In his opening remarks, Nicholas took a moment to recognize the work of the former Chair and Vice-Chair. “As a young man growing up on a reserve, my father—who was chief for many years—instilled in me that it is vital to honour the work of those that came before. On that note, I would like to honour the work and commitment of Wilda and Krys.”

New elected student and staff representatives will be sworn in at the October Board meeting.

Learn more about College of the Rockies’ Board of Governors at cotr.ca/board