The two-day stop in Cranbrook will be capped off by an NHL game live broadcast from Cranbrook. 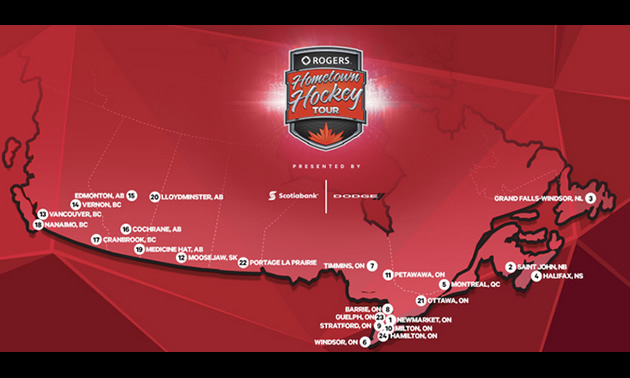 Rogers made the official announcement earlier this morning on Breakfast Television morning programs across the country.  The two day stop in Cranbrook will be one of 24 communities involved across Canada during the 2016/2017 NHL season, capped off by an NHL game live broadcast from Cranbrook.

“I am very pleased that Rogers Hometown Hockey has chosen Cranbrook to host this great event and live NHL broadcast,” says Lee Pratt, Mayor of Cranbrook. “Our community has a long and successful hockey history and we are excited to share some of the stories with Sportsnet viewers.  Many professional hockey players were born and raised here and some have returned to make Cranbrook their home once again.  City staff and residents of Cranbrook are proud of this heritage.”

What is also special about this event is the national exposure Cranbrook will get to viewers across Canada with a strong focus on the City itself, its history and great stories about the people in the community.

“We once again look forward to working with Rogers on this large scale hockey project that will bring our community together by the thousands into our downtown streets; showcasing to TV viewers the reason ‘We call Cranbrook, home’,” says Paul Heywood, the lead coordinator and manager of special events and marketing for the City of Cranbrook, who will be coordinating the 14 trailer Hometown Hockey exhibition in downtown Cranbrook.

City staff is working closely with Rogers to finalize the location of the festivities in the City and work through all of the logistics of the two day event.   More information about Rogers Hometown Hockey in Cranbrook will be provided over the next few months.

“We are looking forward to working with all the communities surrounding Cranbrook to make this a very enjoyable and successful partnership with Rogers Hometown Hockey,” Mayor Pratt adds.