The MOU will guide the three parties in the development of a rights recognition approach to a treaty. 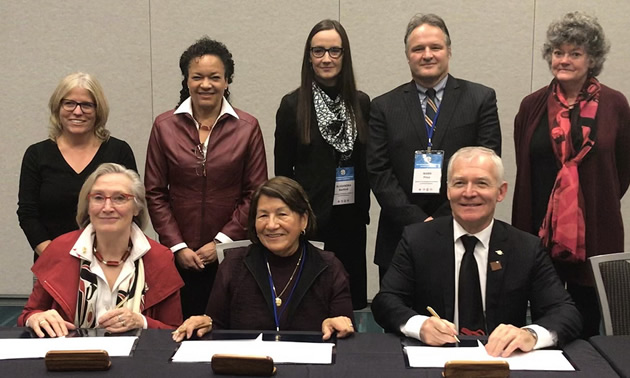 The governments of Canada and British Columbia and the Ktunaxa Nation signed a new agreement that will significantly advance reconciliation and treaty negotiations.

A rights recognition approach explicitly recognizes that Aboriginal rights are inherent and cannot be extinguished or surrendered, and seeks to build a collaborative and predictable ongoing government-to-government relationship.

Through this approach, the parties have agreed to develop a “core” treaty and move directly into the last stage of treaty negotiations.

Under the agreement, key elements such as self-government, land ownership and stewardship, and law-making authority will be written into a constitutionally protected core treaty. Administrative and policy matters will be addressed through supplementary agreements that can be more easily amended, allowing for the government-to-government relationship to evolve as laws, policies and interests change. This approach allows for a treaty relationship that is flexible and able to adapt over time.

Kathryn Teneese, Ktunaxa Nation Council chair – “I am very pleased that the three parties have agreed to adopt an approach that explicitly and properly recognizes our inherent rights as Ktunaxa. This agreement ensures the ongoing relationship between the Ktunaxa and provincial and federal governments will be based on mutual respect and understanding and is a key step on the path towards reconciliation.”

Carolyn Bennett, federal Minister of Crown-Indigenous Relations – “This MOU with Ktunaxa Nation is a clear example of the innovative and flexible approaches that we are taking to transform the Crown-Indigenous relationship. We are committed to working together to develop a new recognition of rights approach with this community, one that includes a core treaty approach and, importantly, a legal recognition of the Ktunaxa Nation.”

Scott Fraser, B.C.’s Minister of Indigenous Relations and Reconciliation – “This agreement is a product of government listening to the Ktunaxa Nation and taking a collaborative, flexible approach. With the Ktunaxa Nation and the federal government, we are on path to design a treaty that respects and recognizes Aboriginal title and rights and lives up to the United Nations Declaration on the Rights of Indigenous Peoples. This partnership supports B.C.’s ongoing efforts to transform treaties to better reflect our growing and evolving relationship with First Nations.”