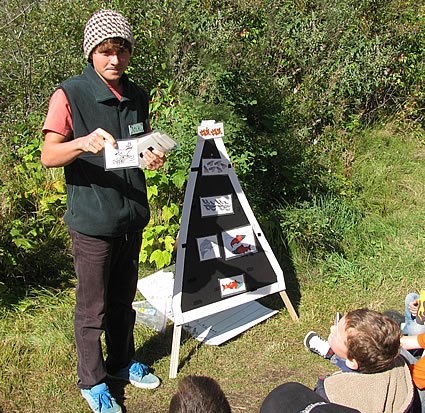 This photo shows the vast historic trains display area at the Canadian Museum of Rail Travel in Cranbrook. It is taken from the roof of the Museum's Royal Alexandra Hall, which is adjacent to the trains. This fenced site is almost 1,000 feet long.

Seven specialized consultants are involved in a $115,000 study to chart long-term museum survival.

Last week, Aug 10 to 13, several consultants were in Cranbrook to begin a half-year major study on the Canadian Museum of Rail Travel and its future. It will assess risks to the museum, particularly the historic railcars and the governance structure, and recommend solutions for the short- and long-term. It will also provide recommendations on the proposed new train display building and its efficient preservation systems, and then bring everything together into a long-term business plan. The perspective of this exercise is hundreds of years, not the usual five- or 20-year plans, since museums are expected to survive—literally—forever.

"The Museum Board and the Museum Development Committee of the City have been involved with this project for several years in raising a substantial amount of money to give us the best advice possible for the very long-term," said Wayne Eburne, chair of the City-appointed Museum Development Committee. "It is essential to have this done now, especially with the pending retirement in the next few years of the current executive director and CEO, Garry Anderson, who has been involved with the project since it began in 1975. This study will help bridge that major transition."

The $103,000 (plus tax) plan is funded by assistance from the Columbia Basin Trust’s Community Initiative Funds, the City of Cranbrook, the Museum Assistance Program (MAP) of the Dept of Canadian Heritage, and from the museum itself.

The plan involves seven specialists in various disciplines assessing the current facilities and their operating systems, determining capital and operating budgets, and recommending new, efficient systems that will result in "dramatic" energy reduction from what would ordinarily be expected in the new 78,000-square-foot train display building. The board and committee made it clear that they want a re-evaluation of environmental control systems that are expensive to operate and which are normally used for the preservation of artifacts, but the solution must also still meet national conservation standards.

"This is a critical, but reasonable demand, since the large trains display building will only have to be kept a few degrees above freezing in the winter, and around 20 degrees in the summer. By using slow transitions between these levels in the fall and spring seasons, a fairly constant relative humidity should be able to be maintained, which is a standard requirement for most museum objects," said Anderson.

The plan is led by Lee Boyko, who put the team together and has an extensive background in museum work and planning. Conservator, Andrew Todd, will assess the current condition of the railcar collection and provide input into the museum standards that will be required in the new building.

Architect Nick Milkovitch, with colleague Neil Prakash, will provide an overview of the trains display building. This will cover its impact on the current site and buildings and on the city itself, and some of the overall considerations to give an architectural wow factor worthy of a national museum. This huge new structure will also have to harmonize with the existing neo-classical brick facade of the existing museum.

Detailed building plans will not be done at this time, as that expense is well beyond the plan budget. Equilibrium Structural Engineering, which were recently involved in the Cranbrook Airport, will investigate and recommend on the type of structure needed, including wood, since BC is a wood-producing province. Jamie Dabner of Cobalt Mechanical Engineering will provide critical recommendations on options for the building operating systems, particularly the environmental controls system options, which must use new efficient technologies—including government mandated "green" technologies such as geothermal and solar—to greatly reduce energy consumption, an important part of the terms of reference. Solar may hold great promise, as Cranbrook is the second sunniest location in Canada according to Stats Canada.

Roger Dupuis of Applied Engineering will provide recommendations on the electrical requirements and the systems needed, again with potential solar involvement. This firm also did some recent COTR design work. The cost consultant is Roger Artis of BTY Group, which will outline all of the required capital costs needed to complete the current buildings and the new train display building, as well as all of the operating costs needed to make this museum viable and make an impact on both tourists and the local community.

The historic passenger railcars belong mostly to specific sets of equipment of certain eras and are considered "deluxe hotels on wheels." The collection is still stored outdoors, but contains rare and extremely fragile interiors of significance to Canada. Current partial environmental control systems in some cars assist with preservation, but this type of system is becoming increasingly expensive and is not an optimum solution for the long term. The originality and construction nature of the railcar artifacts themselves prevent more intrusive measures, such as added wall and ceiling insulation. If introduced, this would provide more efficiency, but partially destroy the artifact.

Another major challenge, particularly for the business plan, will be how to develop and sustain both tourist programming and attendance (and its earned revenue), and local programming and attendance, while at the same time meeting the challenges of preserving the railcar collection to national standards. Local and national priorities and appeal do not necessarily line up.

The plan will end with a note of what the consequences would be to the institution and to the railcar artifacts (and indirectly to the community) if nothing is done.

"We all have a chance to do this plan right and to the highest standards using (the) most efficient energy systems possible, and this is why the terms of reference have a very strong 'museological' perspective. What other institutions in our society require such a long perspective and need to preserve objects in perpetuity? That is the job of museums alone," said Bob Bennison, chair of the Museum Board.