Solar panels cover the roof of Hopkins Harvest in Windermere 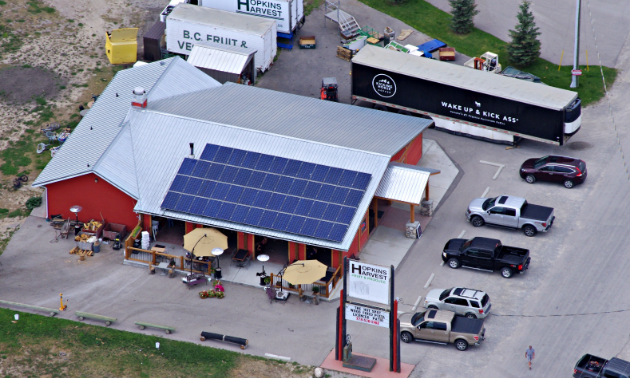 If you drive through Windermere on Highway 93/95, you’re likely to notice two big red buildings. One is the fire hall. The other is Hopkins Harvest. One of those locations puts out fires, the other offers fresh produce and gourmet wood-fired pizza and draws its power supply from the greatest flame of all, the sun.

Fifty-one solar panels now line the roof of Hopkins Harvest, providing 25 per cent of the power required for the summer months. It’ll be cost-effective in 10 years and co-operator of Hopkins Harvest Kerstan Hopkins said, “It was a no-brainer. Hydro prices are always going up. Solar panels are the new ‘in.’ ” Kerstan isn’t blowing smoke either, since the solar panels have been installed at the end of July she’s already had customers coming in and telling her how they’ve been inspired to install their own solar panels for home use.

As for the crew installing the panels—Empower Energy based in Kelowna, Kerstan has nothing but good things to say about them. “Josh and his crew have done a wonderful job,” she said. “I would highly recommend them.”

It hasn’t been all sunshine and rainbows getting the solar panels installed onto Hopkins Harvest roof though. Kerstan admitted, “It is stressful to do this amidst all the other things we have going on, but we wanted to start it up, just do it!” Kerstan explained that one of the most challenging obstacles to overcome has been the government. “B.C. has no government grants for solar panels.  We’ve had no government help whatsoever,” she said. “Just for the regional district to approve, we needed to take care of a few things. The Alberta government has solar incentives, why doesn’t B.C.?”

Drawing in solar energy for the purpose of going green is certainly nothing new to the Hopkins family. Fred Hopkins is the founder of Hopkins Harvest and father of Kerstan. He started his produce venture 21 years ago selling food out of his truck on the side of the highway for over five years. Fred grew up as a farmer in Salmon Arm and knows good produce when he sees it. He wanted to bring those same quality goods that he was raised on into Windermere and the surrounding communities so he brings it in from the Okanagan.

Hopkins Harvest has been in its current location for the past nine years, and Kerstan said she wanted to take over for her dad and keep the business in the family. There’s a mural in the store that shares the Hopkins motto—“From farm to table.” They back that up by providing certified organic produce, gluten-free meat, fresh-made pies, bread and salsas amongst other home-grown creations. Absorbing the natural light of the freely giving sun seems consistent with how Hopkins Harvest operates.

No doubt that kind of encouragement fuels Kerstan to keep doing what she’s doing, as she puts it, “I work 16 hours a day, every day, but it’s very rewarding. My favourite thing about coming to work is seeing how happy customers are coming in every day.”

Probably the most sought after recognition that any child can get is the stamp of approval from his or her parents. Through a proud smile you can sense the joy that Kerstan feels as she reveals how proud her dad is of her.

Hopkins Harvest is drawing in more sunshine than ever thanks to its new solar panels, and it appears the business shares that light and warmth with everyone who walks through its doors.

Josh Persaud of Empower Energy says a regular business or family home could have a 12-solar panel system installed and ready to go for approximately $10,500.  Here’s the rundown on Hopkins Harvest: 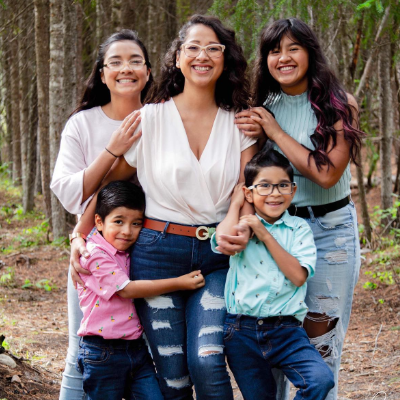