A community-oriented way to do your banking 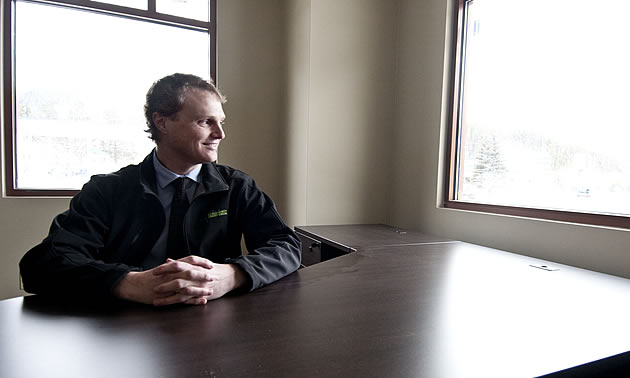 1 of 4East Kootenay Credit Union Sparwood Branch Manager, Eric Johnstone, sits at his desk in his office when it was still under construction on January 27th. — Brielle Will photo 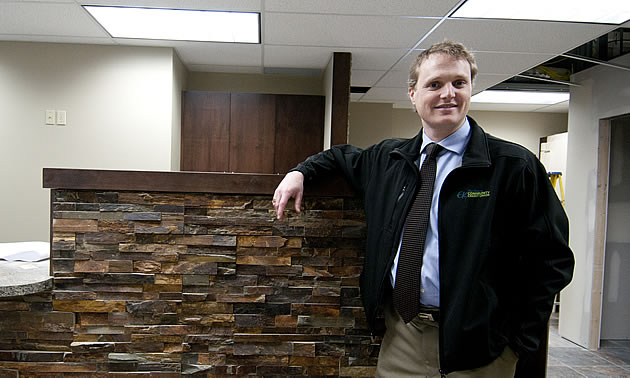 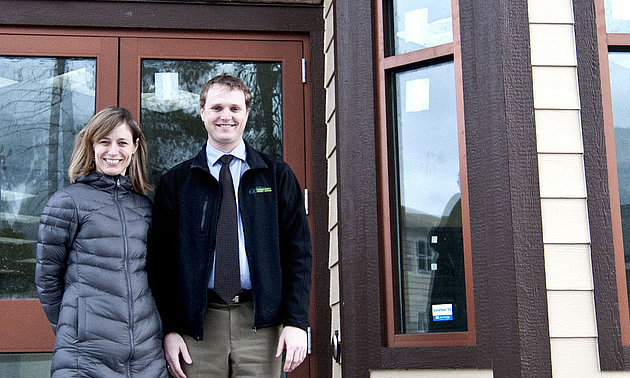 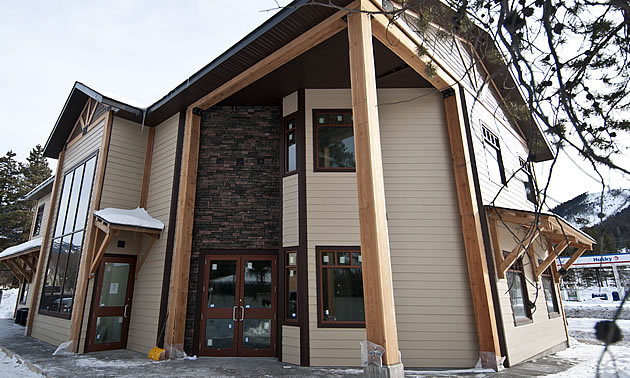 4 of 4A view front entrance of the brand new East Kootenay Community Credit Union on January 27th before its opening day in February. — Brielle Will photo

The new year ushered in many positive changes in Sparwood, including the opening of an East Kootenay Community Credit Union (EKCCU) branch in mid-February.

Located in the heart of town on Aspen Drive, the building features colours similar to the Fernie Credit Union and takes the best aspects from the interior of several other branches, giving it an inviting and comfortable appeal.

The two-storey, 3010 sq ft. branch will house an insurance office on the main floor and provide financial planning as well as all personal and business banking services.

The second floor incorporates an open office space with a bright view overlooking the coal mining community nestled within the Elk Valley.

The main entrance faces the local post office. Further development plans include a courtyard, a children’s park, bike racks, paths between the buildings and a treed landscape.

“This will allow for people to step out of their cars and it will encourage walking traffic around the businesses,” said Eric Johnstone, branch manager at both Fernie and Sparwood. “We really want it to have a community feel.”

Johnstone has been with the credit union for 15 years and has resided in the Elk Valley for nearly a decade.

He explained that a  few construction snags extended the expected opening date, but the new building recently had stone in the walls set, flooring finished up and the final move-in of furniture.

Due to the long-anticipated opening, EKCCU set up a temporary branch behind the new site in the old RCMP building. Loan applications were accepted as early as November and all services will continue to be available there right up to opening day at the new building.

“The soft opening allowed people to avoid the rush before opening and allow us longer conversations with people,” said Johnstone.

A 60-year history of community service

Founded in 1950, EKCCU opened its first location in Cranbrook, followed by Elkford and Fernie, and has quickly grown into one of the largest credit unions in the area, with over $200 million in assets.

A credit union is a financial co-operative owned and operated by members of the community who use the services. There are 1800 credit unions across Canada serving nearly five million people.

With the opening of EKCCU in Sparwood, this town of approximately 4,000 has three financial institutions as options.

With a considerably large base of EKCCU members already in Sparwood, residents will no longer need to travel to neighbouring Elk Valley communities for EKCCU’s services.

“This gives them the deserved and convenient access,” Johnstone said, “rather than driving either to Fernie or Elkford.”

The organization, which prides itself on being strongly community-oriented, has a locally elected board of directors as well as a staff with roots in the Elk Valley. EKCCU Sparwood recently handed out an award of $12,500 to a local society for a community project. As well, a “nominate your neighbour” campaign allows residents to vote for their favourite local volunteer. The winner will receive $3,000 towards a charity of their choice.

Several staff members have also joined local committees, such as the Sparwood Futures Society and the board of directors for the Sparwood Chamber of Commerce.

“To be a part of the credit union is to be active in community,” said Johnstone. “It is not just about donating dollars, it is about getting involved and volunteering time and skills. That is the true glue in the communities.”