An important link for Sparwood

A new bridge and pipeline crossing will create many benefits 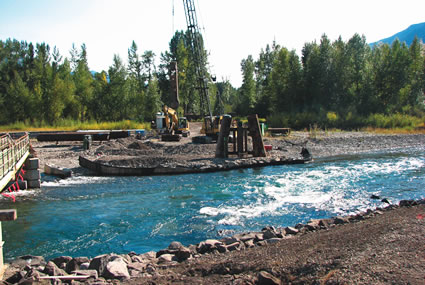 The bridge is downstream from where Michel Creek joins the river. It will create a 1.5-kilometre route to downtown from Sparwood Heights. — Photo courtesy District of Sparwood

The timing is right for a pedestrian link and improved infrastructure between Sparwood and Sparwood Heights. As development is in the works for the Whiskey Jack golf course and residential complex near Sparwood Heights, and environmental and health awareness increases, all levels of government are offering funding for community development initiatives.

One primary reason for this project is to replace 30- to 40-year-old drinking water and sewer pipes that run under the river. The new lines will be suspended from the pedestrian bridge and will eliminate the concern of pipe failure due to flooding.

Danny Dwyer, director of planning for the District of Sparwood, said the safety advantages will be important as well.

“If we had to get an ambulance across, we could,” said Dwyer. “We’ve got close to 1,500 people in Sparwood Heights. Walking Highway 43 in the wintertime, you can imagine what it is like for a pedestrian when a snowplow goes by—it’s terrible.”

Dwyer spoke of the scenic area that will be accessed by the bridge.

“It’s the most beautiful part of town in that little corner,” he said. “The access to the river will be significant.”

Plans for The Jewel

Mayor David Wilks wants to improve the quality of life in Sparwood by creating a network of trails on riverside wilderness land donated by Teck Coal—land that will be made accessible by the bridge and the rail overpass that is planned for construction in 2010.

“It will cross to the 13-acre parcel that is commonly known as The Jewel,” said Wilks. “We plan to involve the environmental club at the high school in designing a walking path route through that area. It is very pristine, and we plan on keeping it that way.”

The District of Sparwood had their funds in place for this project, but could not have gone forward without additional support.

MLA and minister of community and rural development, Bill Bennett, said that he is confident about directing funds to Sparwood, as he feels the community is well managed.
“When Dave Wilks explained that the District of Sparwood wanted to get a sewer pipe out of the Elk River and build a pedestrian bridge over the river on the north side of town, I knew it was a project that had to happen,” said Bennett. “(So) I found the funds to help the district realize their dream. Then when we found out what was needed to get over the railway so people could access the new bridge, I managed to help that project qualify for the Canada B.C. Infrastructure Program. All told, the province put in $1.4 million for the Elk River pedestrian bridge and pipeline crossing and $707,000 for the CPR overpass bridge.”

Bennett, who likes to fish, viewed the site of the construction and suggested that a boat put-in would be a good addition to this project, due to its road access and the popularity of the Elk River.
Wilks said that the District of Sparwood is in the process of making an application to the Department of Fisheries and Oceans to get permission for a put-in.

“It’s higher strength,” said Garrett, “and the engineers are asking for a type 50 or a type 1-2, which is sulphate resistant. It’s due to the soils in the area.”

Garrett said that although the project is taking longer than expected, it seems to be progressing well.

“We’re happy to be involved and we feel it is a worthwhile project,” said Garrett.

Dwyer said that the bulk of the construction would be completed by November, including the erection of the self-weathering steel trusses, and the surfacing would be done in the spring, prior to groundbreaking for the railway overpass.