A young man with a plan for Sparwood

Meet Michael Decker, the new manager at the Sparwood & District Chamber of Commerce 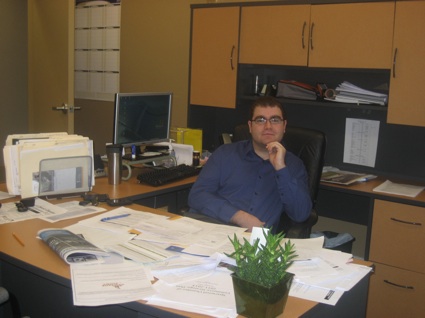 Michael Decker is off to a fantastic start as the manager of the Sparwood & District Chamber of Commerce. — Photo courtesy Michael Decker

There is a new face at the Sparwood & District Chamber of Commerce. Michael Decker has stepped into the role as chamber manager—and, at 21 years old, Decker is the youngest manager in B.C., possibly in Canada. But don't let his age fool you—the impressively well-spoken Decker has a clear vision for the chamber, almost as if he's been doing this for years.

"It’s a testament to the board of directors that they were willing to take a chance and hire me," said Decker. "I grew up here; they knew who I was and about my involvement in the community, so I hope I’m not letting them down."

Making it bigger and better

He has certainly started off on the right foot. The chamber of commerce held its AGM on February 2, drawing more than double the attendees that last year's meeting did. He said he's working to change the path of the chamber, and started his first day on the job by setting up Facebook and Twitter accounts. Decker wants to entice the young, tech-savvy generation as well as make Sparwood's chamber one that will have the Elk Valley's businesses eager to join.

Decker said his goals include getting a new website for the chamber with links to social networking sites to best represent Elk Valley businesses. He also wants to promote environmental sustainability, demonstrating how being green can be financially viable. He wants the chamber to play a larger advocacy role within the region, and is encouraging government to look at funding schemes and criteria for hiring summer students.

"I’m (working on) a renewal of the chamber—getting our name and voice back out there in the community," said Decker. "I’ve taken the car, turned it around and put it on the right side of the road, and the businesses and the board of directors have been supporting me from the get-go."

There and back again

Decker was raised in Sparwood and looked forward to leaving the town for the big city. His schooling took him to Calgary, where he obtained a bachelor's degree in policy studies from Mount Royal University. His education gave him experience interpreting government policies, as well as opportunities to network with politicians—things he feels are helping him in his new position. His past jobs in Sparwood, including a stint as a summer student at the chamber, gave him insight into the workings of the business community. When the opportunity to become the manager arose, Decker was ready to leave long commutes behind and embrace the outdoor lifestyle available in the East Kootenay. He also saw it as a chance to reconnect with people who had helped him in the past.

"The business community taught me the skills that anyone would need to be successful—the ability to teamwork, multi-task and network," said Decker. "I’m looking at this job as a chance to give back to the community."