We are once again pleased to welcome Bryan Cox, Mining Association of British Columbia, (MABC) President and CEO, to the Canadian Mining and Energy Podcast. 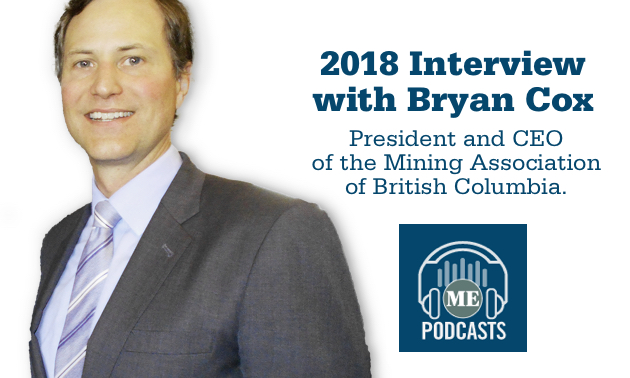 We are once again pleased to welcome Bryan Cox, Mining Association of British Columbia, (MABC) President and CEO, to the Canadian Mining and Energy Podcast.
Here is a summary of what we spoke about with Bryan…

1)  What has changed in the mining industry in the last 12 months?

Mining infused $11.7 Billion into the Canadian economy last year and the sector paid $859 million to various levels of government through taxation.   Mine is very important to so many communities in British Columbia. The industry has benefited from a rise in commodity prices for base metals like – copper, steel making coal and zinc.
From a regulation prospective B.C. is world leader in regulatory systems and is recognized as the best in world in environment standards.  We need to change the discussion around all resource industries – the mining industry is well positioned to talk about its successes and as an industry can be proud of what it accomplishes and contributes – it is a world leader in many aspects.

2)  I understand PwC has released a new report on mining British Columbia – what is the gist of the report?

It talks of the positive economic impact that the industry contributes to the local, provincial and federal economy.  As mentioned, mining contributed $11.7 Billion into the Canadian economy last year and the sector paid $859 million to various levels of government through taxation.

3) You expanded Mining Week to Mining Month – why the change?

Mining Week in B.C. has expanded to include the entire month of May – by an official proclamation of the British Columbia government – the first jurisdiction in the Canada to do so.  It is encouraging to see so many community events in May focused on the mining sector.

4) What are some of the biggest challenges that continue to face the industry?

One of the biggest challenges remains communicating our message of being sustainable, environmentally responsible and good corporate citizens.  For the first time ever, the MABC will be a presenting speaker at the Vancouver’s Tech Summit -- which is a recognition of B.C. being a mining technology hub and high technology hub.

5) What are some of developments you are most excited about?

One of the most exciting developments is the opportunity to communicate this positive message with the industry and the general public.  For eg. MABC has an electric vehicle they take to events to illustrate the essential role mining plays in the clean energy economy – an electric car for instance takes four times the copper than a conventional model.

6) What does the future of mining hold?

B.C. is well positioned to be the #1 choice for mining in the world – from a technology, environment responsibility and regulatory level.

Technology will continue to play an important and expanding role in the mining industry – for example the industry has partnered with a gaming company based in Victoria to build a virtual mine site that allows developers visualize beforehand how a proposed mine’s footprint will impact the landscape.

Thank you to Bryan Cox, MABC President and CEO for being our guest of the Mining and Energy Podcast.

Listen to the entire podcast here….