The way to a community’s heart

Like the rest of us, people in Grand Forks love a good cook—and Kayla Sebastian is an excellent one. 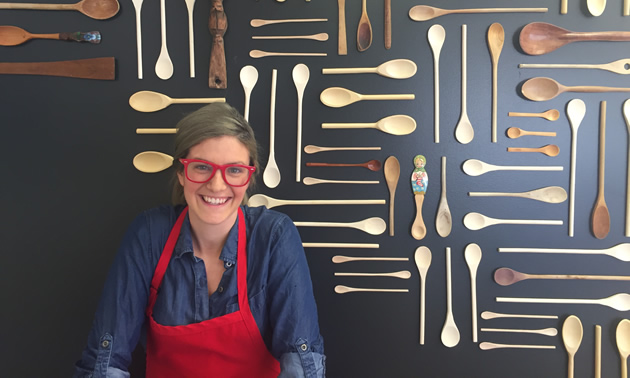 Kayla Sebastian believes that when you can take something that’s essential to life and make it exciting and beautiful—and, in her case, delicious—it’s a gift you give to the world. For this 28-year-old chef, that’s the essence of what food is about.

Sebastian’s increasingly popular restaurant, The Wooden Spoon Bistro & Bake Shop in Grand Forks, B.C., moved into a larger location at 221 Market Street on March 15. The 60-seat restaurant is three times its original size, but the lunch-hour crowd still fills it to capacity and there’s often a lineup of people waiting.

Before opening The Wooden Spoon in 2013, Sebastian resolved that for the sake of her relationship she would make it a breakfast-and-lunch restaurant.

“I would like to stay married,” she said, smiling, “so I’m not going to work until midnight every night. I decided not to open for dinner even though I know the town would welcome a dinner spot.”

The Wooden Spoon’s new location has several defunct businesses as neighbours, and Sebastian sees that as potential for new and exciting development for the community.

“A lot of people of my generation who left for a while are coming back as young families,” she said. “The town has needed this for a long time. Grand Forks has a lot of potential to be a mini-Nelson—we have a lot of the same attractions but we haven’t really utilized them. Now, with the younger people coming in, there’s interest in opening new businesses to support the lifestyle.”

Sebastian wasn’t always a talented cook. When she was a youngster, the only things she made were pancakes and grilled cheese sandwiches, “and I burnt them all the time,” she said. “Ask my mom. Even my best friends will tell you how bad I was.”

At 21, with a real estate licence and paralegal training to her credit, as well as experience working at a Chrysler dealership, Sebastian had not yet settled on a career choice. She decided to follow the suggestion of her then-boyfriend, TJ, and entered the culinary arts program at Okanagan College. After that, the career choice was easy.

Upon completing the program, Sebastian joined TJ in Australia where he was studying to be a physiotherapist. She spent two years cooking for the dinner crowd in various restaurants before the couple returned to Canada.

If there’s a secret to Sebastian’s success with The Wooden Spoon, its roots are in her innovative, multicultural recipes, her uncompromising standards for her product and her respect and appreciation for her staff.

“I’ve done lots of research on how to show my staff they’re appreciated and valued,” Sebastian said. “The first thing is, I ask for their input and ideas, and I listen to them. They know they’re important, they’re proud of being here, and it shows in how they do their job. Having them happy is as important to me as serving great food.”

It seems the word has spread. Sebastian has about 70 completed application forms from people who want to work at The Wooden Spoon.

It’s a running joke in Grand Forks that the staff at The Wooden Spoon—including Sebastian—look like members of the same family. Seriously. They all have dark hair and thick-framed glasses, they’re all about the same height, and the fact that they all dress the same at work makes the resemblance more striking.

“The resemblance is not a requirement—honest,” Sebastian said, laughing. “It’s just worked out this way and I don’t know why. People ask if we’re all related, but other than my mom and me, we’re not.”

Sebastian said she owes a lot of her success to her family and her husband. She’s an admitted workaholic, calling it a terrible trait to have and saying how grateful she is for the support she’s received.

“Grand Forks has been super, super, super supportive to my business,” she said. “My mom has spent countless hours here, and my husband deals with almost everything at home. I also appreciate my other love, my four-pound Yorkshire terrier, Bagheera—she takes away any bad day.

“We’ve been really fortunate to open this place and I’m happy with how it’s going. I’ve touched a niche that needed to happen here anyway, and I believe we’re going to be here for a long time.”

Incidentally, if anyone is wondering if it’s the stress of business that’s turning Sebastian’s hair from dark to silver—it isn’t. She’s actually paying to have it done.