Grand Forks slams it out of the park 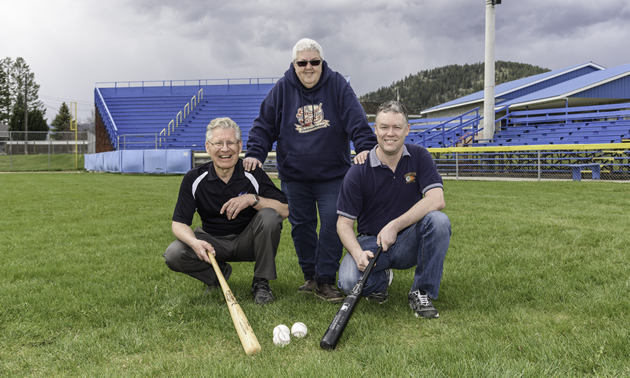 Up to 300 volunteers are getting ready for an intense, rewarding week during Grand Forks, B.C.’s biggest annual tourist draw, the Grand Forks International baseball tournament (the GFI), scheduled for June 27 to July 2, 2017.

Recognized as the highest ranking invitational baseball tournament in North America in terms of prize money, this six-day event will feature 12 high-calibre teams from colleges and universities in the United States and Canada, all competing for a share of $54,000.

“Our GFI is still the tournament of tournaments,” said GFI president Gerry Foster. “There are some that may have more teams, but in terms of the prize money and the calibre of play, we’re number one.”

The two Canadian teams that will compete at the GFI this year are the Burnaby Bulldogs—winners of the GFI in 2014 and the first Canadian winners since 1976—and the Okanagan Summer Collegiate Athletics, a new team under coach Geoff White. A full roster of teams is available on the GFI website.

Testimonials from players focus on the memorable GFI experience.

"My time at the GFI is one that I will never forget. Great crowds accompanied by great baseball made the games very exciting and I can't wait to hopefully be back." —Ethan Klosterboer, third baseman, Texas State University, San Marcos, Texas

"The GFI was an amazing experience that I love competing in every year. The feel of the ballpark and the atmosphere created by the fans makes this tournament one of the best in the world." —Darrell Wilson, outfielder, Briar Cliff University Sioux City, Iowa

Couldn't have done it without you

Generous local sponsorship provides a hefty portion of the $150,000-plus that’s needed to produce this multi-day event. Roxul Inc., Community Futures and the Grand Forks Credit Union have been faithful sponsors for the entire 42-year history of the GFI, and other long-time sponsors include Pharmasave, the Grand Forks Station Pub, Kal Tire, Interfor Corporation, ABH Car Sales Ltd. and the Regional District of Kootenay-Boundary.

“We’re always looking for more sponsors to come on board,” Foster said, “and we also know that we just wouldn’t make it without strong fan support. We need people to show up at the ballpark. Grand Forks itself is only about 4,000 people, with about the same number in the surrounding area.”

Foster said that even during the Canadian economy’s downward slide, sport tourism was profitable. According to the Canadian Sport Tourism Alliance, more dollars are brought into this country by sport tourism than by any other branch of the industry.

The GFI draws hundreds of thousands of dollars annually into the economic coffers of the Kootenay-Boundary region. Traditionally, every hotel, motel and campground in the vicinity of Grand Forks is full during the tournament; restaurants are busy, and visitors are happily storing memories to share with family and friends back home.

“In terms of tourism,” Foster said, “this does so much for Grand Forks and the surrounding area, and not only during the week of the tournament. People are introduced to this wonderful community and they tell others about it. Last year we had players here from at least 20 states, so those seeds are being planted all over the place.”

Foster knows people who, after being  introduced to the community through the GFI, moved permanently to Grand Forks, and he knows many others who have frequently returned to the Boundary region since they attended their first GFI. Foster himself recently reserved four GFI seats for first-timers who will be coming all the way from Houston, Texas, in June. They’ve heard such positive things about the GFI that they decided to make the trip to Canada.

“The image of any community is vital to attracting new residents,” he said, “and the atmosphere here during the tournament blows me away. This is what (GFI founder) Larry Seminoff’s dream and vision were, way back in the 1970s.”

Some GFI games will be played in the fresh coolness of early morning, some in late June’s afternoon heat, and some at night, under blazing floodlights. Whatever the time of day and whatever the size of the crowd, energy among the players and fans will be high and competition will be fierce. And win or lose, their shared love of the game will make the occasion sweet.