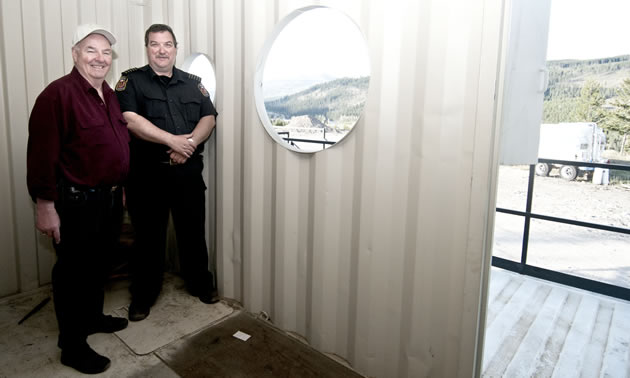 1 of 3Mayor Dean McKerracher and Fire Chief Bernie Van Tighem stand on the second level of the new fire training facility in Elkford on May 15, 2012. — Brielle Will photo 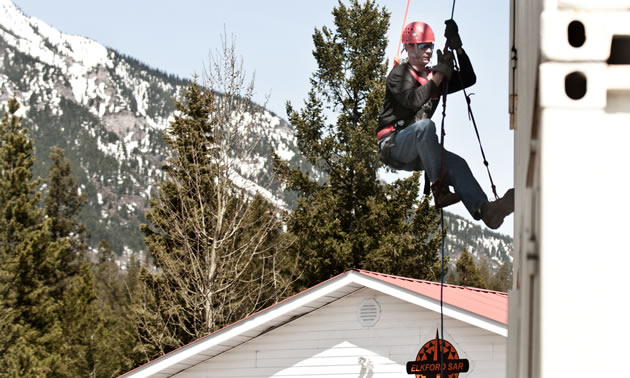 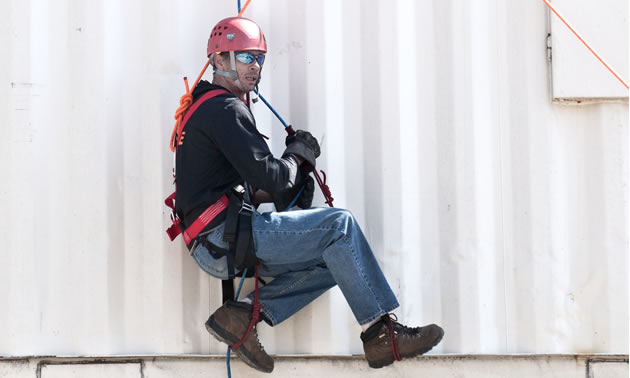 The Elkford FireTraining Hall is up and running, allowing thefirefighters, search and rescue crews and other emergency organizations throughout the Elk Valley to make use of the advanced, accessible and functional facility.

A series of portable sea containers have been arranged over a concrete foundation into three storeys behind the main Elkford fire hall and RCMP detachment.

“It is money well spent, as the training centre will be beneficial to communities up and down the valley, from Jaffray to Elkford,” said Elkford mayor Dean McKerracher.

The nearest training centre otherwise is located in Kimberley, B.C. Until now, fire department members were required to commit to a week of training and travelling out of the area, meaning municipality funds were often being put into transportation and accommodation as well as the accreditation for higher-level training.

Although the so-called "sea-can" building, from ContainerWest Co. of Richmond, is fairly unique to the area, similar units have been popping up throughout Canada over the past decade, according to fire rescue and emergency services chief, Bernie Van Tighem.

“Concrete is only as strong as the steel in it and will absorb the heat before giving back, while steel will give back the heat right away," Van Tighem said. "Over time, as concrete’s rebar is exposed to heat, it crumbles and it is more expensive to both repair and build,” said Van Tighem, who has been part of the planning process for this project since early 2007.

A concrete tower of equal size would have cost the district around $3 million, whereas the standing buildings cost approximately $185,000.

The tower’s base is housed in three sea-cans which lead up to the second level, with two more rooms and a deck overlooking the northeast side of the Elk Valley across Elkford, and another stairway to a third storey.

The buildings are set up for confined space training, such as in wells, fires and mining operations, as well as for ladder and high-angle rope training for search and rescue teams.

Each level will also have interchangeable partitions acting as walls inside the development, to ensure none of the spaces become too familiar to those using it during training.

Props have already been donated to the facility to create a more realistic setting during simulations, and a gas line and spill fire area are currently underway.

As well, Tighem is working on a proposal to install a heli-pad in the wide open area behind the building, adding to the multi-purpose use.

“As the mayor, I am thrilled it has finally come through – Bernie has come through and we are really pleased,” said McKerracher. “I think any training we can give our firefighters or mine rescue teams and search and rescue is a bonus for everybody.”

The facility is expected to be rented for training of emergency services from the Crowsnest Pass, Elk Valley, local contractors and mine rescue teams, as well as programs with the College of the Rockies.

“It is difficult for fire departments across Canada to recruit and maintain volunteers," said Van Tighem. "This is a big toy and they can come to train now where we can simulate scenarios and not be redundant,” said Van Tighem. “Hopefully this has everyone talking and we'll see more members out and be provided with certified training.”